INDIANAPOLIS (WXIN) -- A man on the run for more than a month after his daughter's death appeared in court for the first time on Wednesday.

IMPD was calling Kendall Brye, 40, a "person of interest" after his 8-year-old daughter was shot and killed. He's not facing murder charges right now but police are investigating the girl's death as a homicide.

The IMPD Violent Crimes Unit and U.S. Marshals apprehended Brye on Monday at the Marriott near Keystone Avenue. He was taken into custody without incident.

On Monday before the court, Brye was visibly emotional. He did not comment when FOX59 asked him questions.

He faces multiple charges, including neglect of a dependent resulting in death. Kendrielle Brye, 8, was shot in the family's home in March.

"We believe this is more of a family tragedy than a crime," said David Lewis, attorney of Brye.

That's the argument from Brye's attorney. Kendrielle died from a gunshot wound to the head after police said her mom, Tiffany White, drove her to a fire station. Police said the girl did not shoot herself. At this time, investigators are not saying who pulled the trigger but Brye's attorney had this to say.

"I think it was an accident," he said. "I think the younger child got hold of the gun somehow and the gun went off."

Right now, his client is not facing a murder charge. Court documents said surveillance video shows Brye throwing two guns into the trash outside him home after the shooting.

"The evidence I have, he was not even in the room when the shot was fired," Lewis said.

Police said Brye carried his daughter outside and placed her in the White's car. They said Brye then cut off his GPS ankle monitor and disappeared. 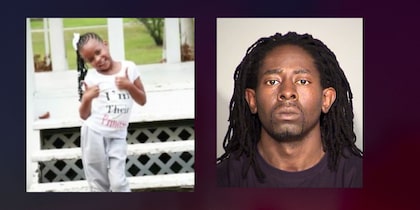 Shooting death of 8-year-old being investigated as homicide