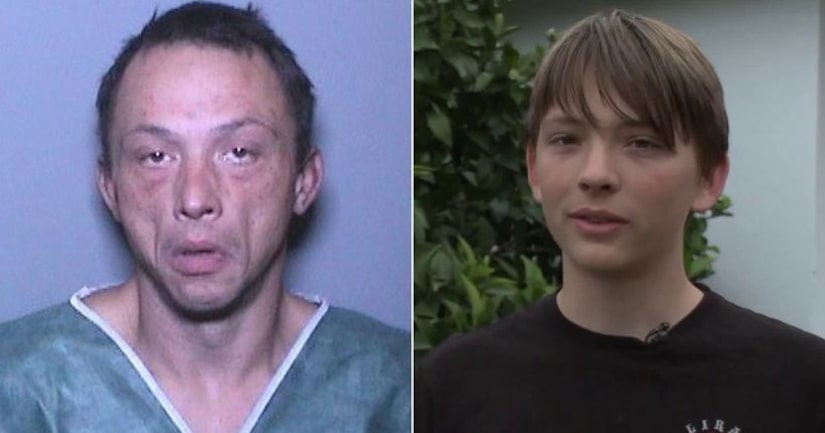 ORANGE COUNTY, Calif. (KTLA) -- A naked man who was chased out of a Rossmoor home after undressing in a 14-year-old boy's bedroom was taken into custody at a nearby elementary school early Thursday following an hourslong standoff, authorities said.

The incident began Wednesday night when the intruder walked into a teen's bedroom while the boy was laying in bed, according to a statement from the Orange County Sheriff's Department.

“When he got into my room, he shook me on my shoulder. I was facing away from the door," said Dane Boryta. “He looked at me and said, 'Just making certain you weren't deaf.'”

Detailing the harrowing ordeal, the teen told KTLA on Thursday that he had never seen the man before and believed he was on drugs at the time or perhaps mentally ill. Somehow he managed to keep his composure as the man started taking off his clothes.

“He started undressing. I looked at him and told him to give me a moment," Boryta said.

As the man disrobed, the teen then went to the kitchen and found his mother and told her there was a stranger in his room.

The man -- completely naked by then -- came out of the room and into the kitchen where he attacked the mother, putting a computer cable around a neck, according to Boryta. His mother fought back.

The quick-thinking teenager didn't want to hit or punch the man because he was concerned it would only escalate the situation. Instead, he grabbed a meat cleaver.

“I raised it over my head and I told him that I didn't want to have to use it," Boryta said, adding, “I would never use the meat cleaver on the guy, but he doesn't know that.”