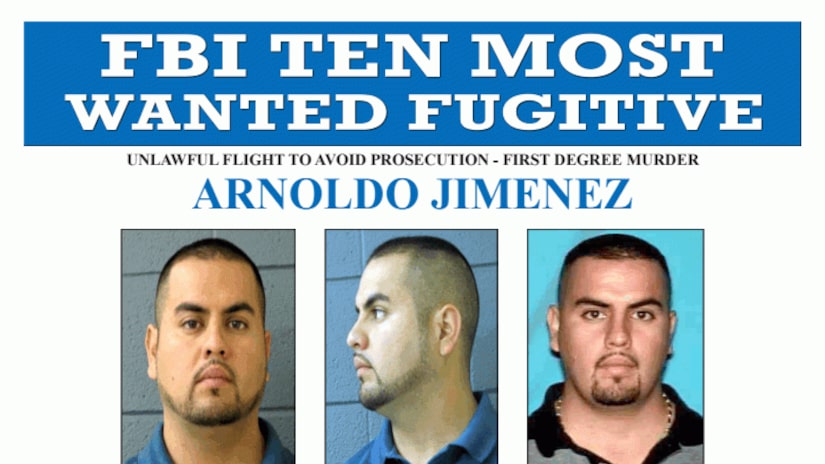 CHICAGO (WGN) -- A man suspected in the brutal 2012 murder of his new bride is the latest addition to the FBI's Ten Most Wanted Fugitives list, and police and family hope a $100,000 reward will lead to his capture.

After 26-year-old Estrella Carrera married Arnoldo Jimenez, her long-time boyfriend and the father of her youngest child, the FBI believes he stabbed her to death in the early hours of May 12, 2012 as they were driving home from their wedding reception in Chicago.

Police say Estrella had been stabbed more than 18 times and was found in the bathtub of her condo in Burbank, IL, still wearing the dress she wore to the reception. After her murder, according to police, Jimenez took off in his black 2006 Maserati and called an ex-girlfriend to tell her he had killed Estrella and was leaving the country.

After Estrella didn't return to pick up her children, family members asked police to do a wellness check on May 13, and her body was found.

Police issued a warrant for Jimenez's arrest in the murder. But by then they believe he had fled to Mexico, and has been staying with friends somewhere near Durango ever since.

While the case has faded from the spotlight, the FBI and Estrella's family hope the $100,000 reward, along with the notoriety of him being added to the Most Wanted List, will be enough to prompt someone to turn Jimenez in.

"Being placed on the FBI's Top 10 is no small feat, so we are very hopeful that this is what's need to end our search, we know nothing will bring Estrella back but we can have some kind of peace knowing that Arnoldo is paying for his crime," Estrella's sister Jazmin Carrera said.