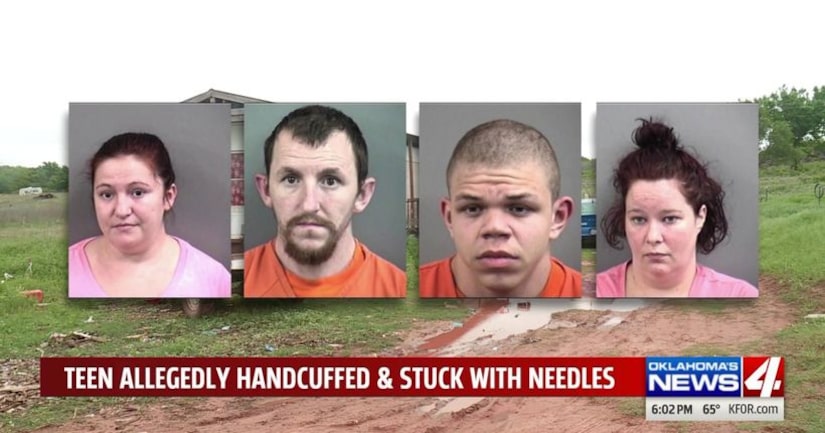 RUSH SPRINGS, Okla. (KFOR) -- Four people have been arrested for child abuse following a slew of allegations, including a disabled child being handcuffed to a bedroom table.

Grady County Undersheriff Phil Blevins told News 4 that the alleged victim is a 13-year-old boy. According to Blevins, their office was notified by the Department of Human Services, which was alerted by the boy's teacher.

"She picks him up in the morning and takes him home at the end of the day. When she picks him up, a lot of times, most times, he smells like urine," Blevins said. "The reason why he smells that way is because, when he gets there, a lot of times, they'll give him a shower. They'll change his clothes, wash his clothes but, during the night, he's handcuffed beside the bed."

According to court documents, the alleged victim told investigators that he would be forced to sleep on the hardwood floor and was not allowed to use the restroom when he was handcuffed, so "he has to 'wet' his pants, because he had to hold his 'pee'."

"The deputy that took the initial report, he was able to see actually signs of, marks around the victim's wrist," Blevins said.

The child also alleges his mother, Summers, and Amber would place superglued paper on his head and later rip it off when it was dry, causing hair to be removed. He claims the suspects sprayed a red chalk-like chemical on his clothes, arms and head, which would burn his skin.

"This child is going to have some things to deal with for years to come and, with him having a disability already, it's very unfortunate and sad," Blevins said. "We're talking about something that more than likely is going to go to trial, so we're going to meet the threshold of proving beyond a reasonable doubt. So, we want to make sure we got our ducks in a row so to speak."