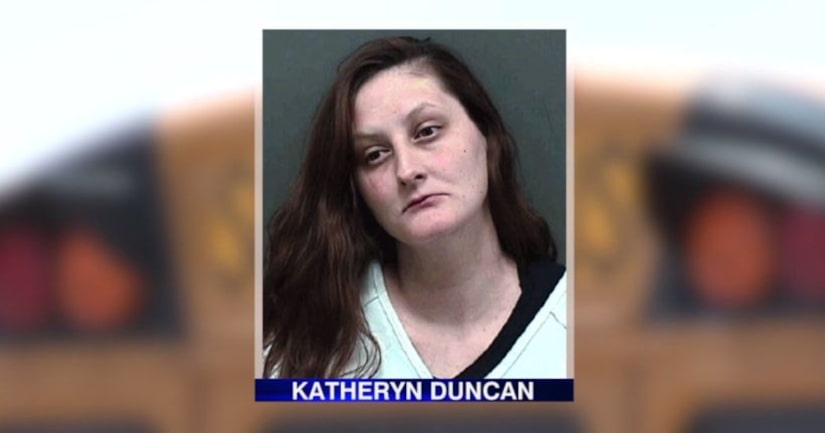 CALEDONIA, Wis. (WITI) -- A 29-year-old woman is accused of storming onto a school bus to punch a 10-year-old girl in the face. The accused is Katheryn Duncan. She faces the following criminal charges:

According to the criminal complaint, on the afternoon of Wednesday, April 17, a Caledonia police officer responded to a report of child abuse on a school bus. The incident happened when the bus stopped on State Highway 38 in Caledonia.

The complaint indicates the 10-year-old girl was supposed to get at a house on Old Farm Road. The "bus driver became confused about where to drop off (the child)."

During the confusion, the complaint says the bus was pulled over. For reasons not given by prosecutors, Duncan ran onto the bus. She allegedly "ran onto the school bus screaming at (the girl) to get off." Duncan and the girl are distantly related.

According to the complaint, Duncan "came up to (the girl) and grabbed her to try to physically force her off the bus. Duncan screamed at (the girl) and struck her in the face several times with both closed fists." The officer noted the girl's cheek "appeared red and slightly swollen," "she also had a lump on her head underneath her hair," and a "large red mark on her upper back."

Another girl on the bus tried to intervene, the complaint says. But she was also allegedly "struck in the process."

When officers spoke to the father of the child, he said Duncan "admitted to pushing (the girl) against the window and tried folding her up 'like a pretzel' in order to remove her from the bus."