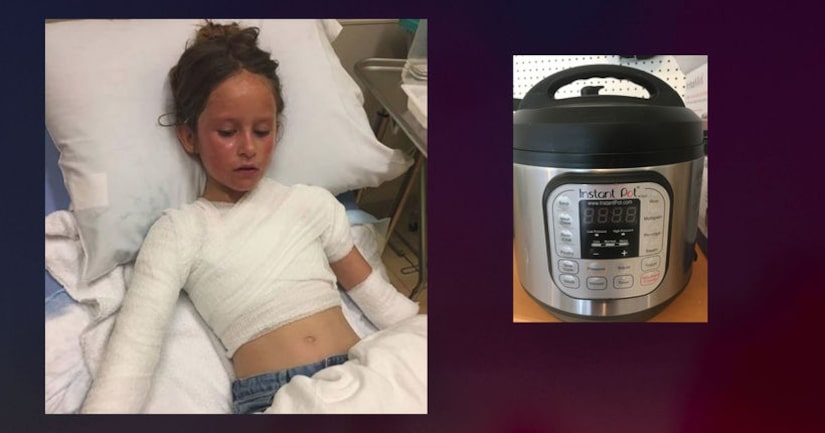 HIGHLANDS RANCH, Colo. (KDVR) -- Lawsuit claims some Instant Pots can be opened while still pressurized. FOX31 tested that claim and found it to be true.

TRAGEDY IN THE KITCHEN

Matt and Mary Cooper's family kitchen has always been a gathering place, buzzing with activity. It's not hard to figure out why. The Highlands Ranch couple is raising six children -- ranging from ages 3 to 14 -- with one more due any day now.

Mary had seen ads which touted the Instant Pot, a wildly popular brand of electric pressure cooker, as a convenient way to fix homemade meals quickly. She jumped online and ordered one.

“I thought Instant Pot was the greatest invention. I thought it was going to help my soup cook faster. I thought that was fantastic. Anything that makes dinner faster and easier is great for a young mom,” Cooper told FOX31 during a recent on-camera interview.

After several successful trial runs and reading all the instructions, Cooper decided to make soup for an acquaintance whose mother had recently passed away.

“I had made the exact same soup before, cooking with the kids. Everybody is by the island around and Caroline wanted to come help me. The soup is done. It beeps it's 'done.' We manually vent it and steam comes out telling you that it is un-pressurizing,” Cooper said. “The valve float drops, and we go to open it and put the kale in. We were just going to add kale. And it exploded. Completely exploded.”

Now 11, then-9-year-old Caroline was suddenly covered in scalding hot soup and her face burned by a hot burst of steam.

“I went into the kitchen to help my mom cook her soup because I love cooking with my mom. And when we vented it, I was opening it, and it just exploded. I closed my eyes. I remember my mom was on the floor. My dad had come running down the stairs,” Caroline said. “I was yelling at my mom to get my shirt off because it was still burning me, so my dad picked me up and took me to the hospital right away because my mom was in shock.”

“The sound was horrible. A true explosion,” said Mary Cooper. “The lid flew somewhere -- I don't even know where -- and every bit, every bit of the soup came out of the pot and was in our kitchen. On the ceiling, on the floor. All the walls were covered.”

Caroline sustained third-degree burns on about 16 percent of her body. Weeks' worth of treatments at Children's Hospital Colorado's Burn Center were painful, both physically and mentally.

“Caroline did not want to see her burns, so they would hold up a sheet so her face didn't have to look at her body, so they had to dress her and clean her wounds and redress them and put casts on her so she couldn't move,” Mary Cooper told FOX31 while tearing up.

Caroline told FOX31, “It was really scary, and I have anxiety still today about it and I was too scared to be around hot things.”

The accident occurred in September 2017 and is the active subject of a lawsuit against Instant Brands, the parent company of Instant Pot. The corporation is listed as a Canadian company, with manufacturing occurring in China.

According to the lawsuit, “Caroline Cooper sustained serious, painful, disfiguring, and permanent scalding burn injuries to her shoulder, arm, chest, and torso.”

The suit also alleges Instant Pot's primary “safety” claim -- that a pressurized pot cannot be opened by the consumer -- is “not true.”