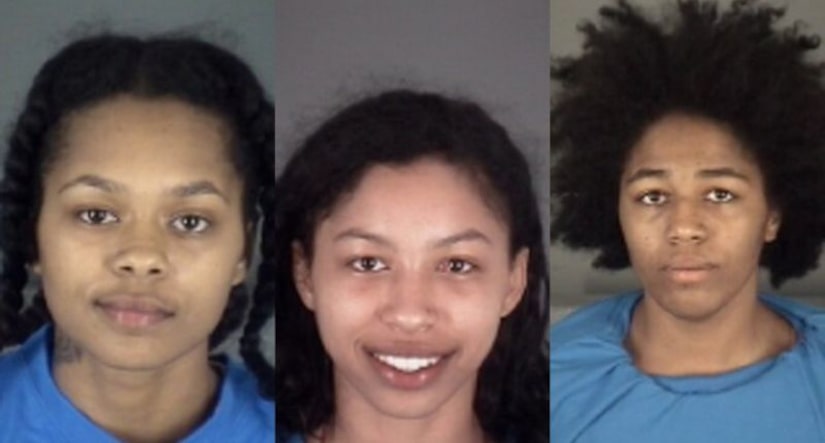 PASCO COUNTY, Fla. (KTLA) -- Three women have been arrested after they led police on a pursuit through Pasco County, Florida, and it all started after someone reported seeing the women naked at a rest area near Interstate-75 on Wednesday.

Around 11:15 a.m., a Florida state trooper was dispatched to the suspicious persons call at the northbound I-75 rest area just south of State Road 54, local television station WFTX reported.

When the trooper arrived on scene, she found three black females completely naked, according to the station. The women told the trooper they had showered and were “air drying.”

As the trooper was attempting to gather their information, the three women ran and got into a white 2009 Nissan Sentra and traveled southbound into the northbound rest area entrance. They then turned back around and headed northbound before traveling north on the 75 toward State Road 52. The trooper initiated a pursuit, but the pursuit was canceled due to the pursuit not fitting FHP criteria, according to the Florida Highway Patrol.

A citizen called *347 to report a reckless vehicle and stayed on the phone with FHP dispatch to provide location updates. The car turned east onto State Road 52 and another trooper spotted the car which was briefly driving in the wrong direction and then turned back eastbound.

The trooper initiated a pursuit for the reckless driving and deployed StarChase projectiles which allowed the troopers to back off and for dispatch to coordinate FHP response and perimeter activities, according to WFTX.

Dispatch tracked the car as it pulled into the convenience store parking lot located at State Road 52 and Curley Road where troopers found the car empty.

As the three women exited the store and got into the car, a trooper attempted to take one of the women into custody.

While the trooper was trying to arrest that woman, the driver allegedly purposely drove directly at the trooper who had to jump away to avoid getting hit by the car.

One of the women exited the car with a metal bat in an alleged effort to hit the trooper, according to the station. Another trooper witnessed this attempt and rammed the suspect car with his marked patrol vehicle and then the women got away in the car once again.

The women traveled eastbound on State Road 52 with the two troopers again in pursuit of the car.

Dade City Police Department responded to the area and deployed stop sticks, which successfully deflated the right side tires of the suspect car. One of the troopers was authorized to PIT the car due to the aggravated assault charges and the totality of the circumstances, according to FHP.