GREENSBORO, N.C. (WGHP) -- Parents are panicked after a woman they entrusted their children with was arrested for child pornography, indecent liberties with children and child sex offenses.

Alyson Saunders worked at Fellowship Day School in Greensboro. The school has now fired her and federal agents have taken her into custody.

FOX8 spoke with parents who are shaken up and have many questions.

Because the incidents at Fellowship Day School are still under investigation, they asked to not be identified for their safety and the safety of their children.

"It's phenomenal. With the programs and the academics. It's one of the best programs in Greensboro. That's why we chose to go there," says a Greensboro dad.

Specialty programs and a religious foundation in learning is what brought him and his wife to send their two kids to Fellowship Day School, until they graduated to elementary school this year.

Then, a Friday morning headline on MyFOX8.com shattered them.

"When I clicked on it, I realized it was the school my child went to," he says.

"I asked the youngest, the one that was there last year, if she recognized the lady, her picture and her name," she said. "She immediately recognized. She said 'Oh, that's Miss Ally, she was a substitute in my class a couple of times. She's really nice.'”

They did decide to let their kids know something was wrong and wanted to use this to prepare their kids.

"I said pictures were taken that should not have been taken of children at the school and that she got in trouble for it," says the mom.

"We also instilled in them that if someone asked you to do something, you don't have to do it," her husband adds.

But it's something they believe they shouldn't have to prepare children for.

They realize, it could have happened anywhere.

"It can happen in your backyard. While you're doing the best for your children, it's not always good enough," the dad says.

These parents say that sending children to school is something that's becoming a little more scary.

"Yesterday I was ready to pull my children out of public school and start homeschooling," the mom explains. 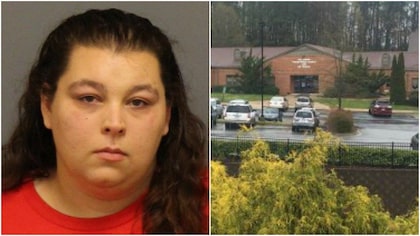