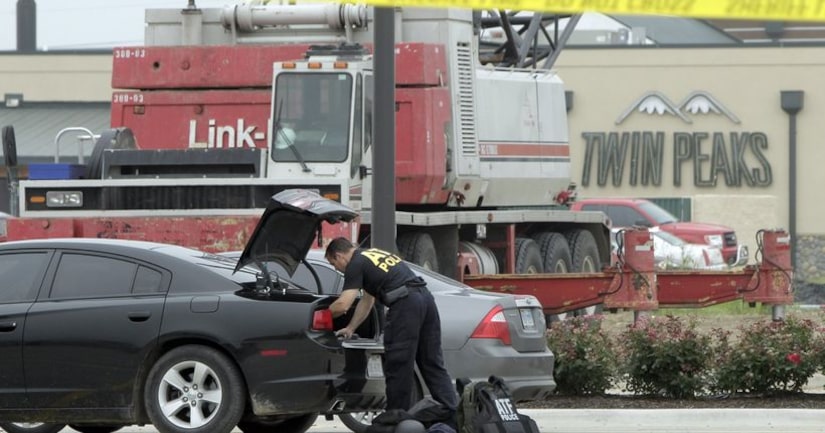 WACO, Texas (KTLA/CNN) -- Nearly four years after nine people were killed and at least 20 injured during a biker gang shootout in the parking lot of a Twin Peaks restaurant in Texas, the McLennan County criminal district attorney's office is dismissing charges against the 24 remaining defendants.

The Twin Peaks shootout in Waco in May 2015 was the violent culmination of a feud between the Bandidos and the Cossacks biker clubs and resulted in the unprecedented roundup by authorities of 177 bikers. Months later, 154 club members would be indicted of engaging in organized criminal conduct in connection with one of the most notorious chapters in outlaw biker history. The charges for all but two dozen defendants were eventually dismissed.

In November 2017, the lone Waco case to reach a jury ended in a dramatic mistrial. Jurors could not reach a unanimous verdict in the case of Jake Carrizal, the president of the Dallas Bandidos chapter.

Barry Johnson, the McLennen County criminal district attorney who has been critical of the way his predecessor handled the prosecutions, said Tuesday that he was dismissing the remaining cases.

“I believe that any effort to charge and prosecute these individual charges at this time would only result in further waste of time, effort and resources of the McLennan County judicial system and place a further unfair burden on the taxpayers of McLennan County,” he said.

Johnson said the 24 defendants were indicted on a charge of riot, a class B misdemeanor punishable by up to 180 days in jail.

“I do not have the degree of confidence that I believe necessary to justify the large expenditures of judicial and law enforcement time and resources, as well as taxpayer dollars, over a period of the next several years, while running a significant risk of having the convictions set aside at a time far in the future by an appellate court,” the prosecutor said in the statement.

The bikers showed up at the Twin Peaks that day to attend a Confederation of Clubs meeting. This is an organization that routinely brings bikers together to talk about motorcycle-related issues. One biker described these meetings as “sacred ground” and not the place to settle conflicts between rival bikers.

The Bandidos argue the Cossacks are not members of the Confederation of Clubs and had no reason to show up at the Twin Peaks restaurant that Sunday afternoon. The Cossacks have said they were there that day to make peace with the Bandidos.

In May 2018, in a case against the Bandidos leadership that was not part of the Waco shootout investigation, the top two leaders of the motorcycle club were found guilty on 13 federal charges.