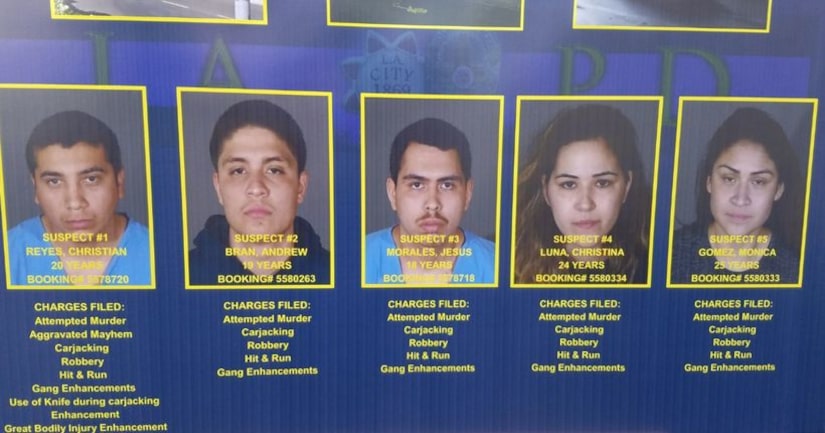 LOS ANGELES (KTLA) -- The Los Angeles Police Department on Wednesday released new details and the booking photos of five alleged gang members charged in connection with the carjacking and stabbing of a pregnant first-grade teacher in Sunland last week.

Three men and two women were charged in connection with the March 20 attack on Tanya Nguyen. Police said the incident appeared to be isolated and that the victim was chosen randomly.

LAPD Capt. David Grimes said three men, later identified as Christian Reyes, 20, Andrew Bran, 19, and Jesus Morales, 18, surrounded the victim's vehicle as she was parked outside her home along Eldora Avenue. Reyes then asked to borrow Nguyen's phone and he eventually punched her in the face and stabbed her multiple times as she sat in her car, Grimes said during a news conference Wednesday. Reyes then allegedly pushed the victim out of her own vehicle and continued assaulting her while Bran allegedly stole items from the vehicle.

Morales got into a Volkswagen Jetta that was stopped in the middle of the street, while Reyes and Bran got into the victim's vehicle, drove away and crashed into several vehicles parked on the street. Once the stolen vehicle was disabled, the men got into the Jetta, where Christina Luna, 24, and Monica Gomez, 25, were allegedly waiting, and the suspects drove away from the scene.

Nguyen, who was 11 weeks pregnant at the time, was taken to a hospital where she underwent surgery for a punctured lung. She had 11 stab wounds and two of her teeth were knocked out, Grimes said. She and her baby are expected to be OK.

Grimes, who called the incident a “heinous crime” said the investigation moved quickly thanks to the public's help. An apparent witness had a photo of the suspects' vehicle and license plate number. With that, police discovered the vehicle had been impounded by gang officers in LAPD's Hollenbeck Division, and that one of the passengers in the vehicle was a known gang member.

In addition, surveillance video captured images of the carjacking – and gang officers from Hollenbeck recognized the people involved.

Six hours after the crime was first reported, gang officers spotted two men matching the description of those involved in the crime, and Reyes and Morales were taken into custody, Grimes said.

The next day, police found the getaway Jetta and the remaining three suspects were arrested.

“It's kind of extraordinary that we got five people in custody within a couple of days,” Grimes said. “Such a great ending to a tragic incident.”

Investigators found property belonging to the victim that was stolen during the carjacking in Bran's home, Grimes said. Additionally, the knife allegedly used in the crime was found in the victim's vehicle.

Grimes said the Sunland community is considered quiet, but police have ordered increased patrols in the area “to make sure it's safe.” 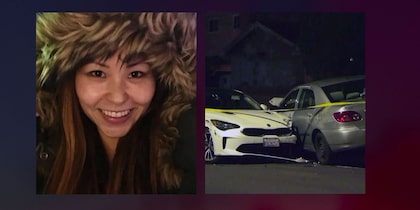 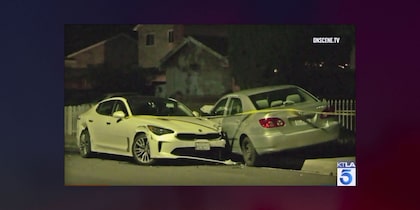