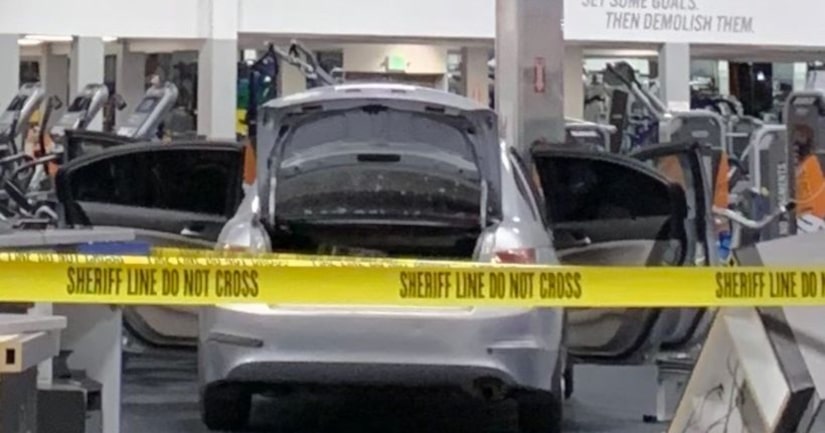 LA MIRADA, Calif. (KTLA) -- A man who crashed a stolen vehicle through a Crunch Fitness gym in La Mirada Tuesday morning was taken into custody and booked on suspicion of attempted murder, authorities said.

Deputies initially responded to a call of a vehicle into a building in the 12800 block of Valley View Avenue just before 1:45 a.m., a spokesperson for the Los Angeles County Sheriff's Department said.

Images from the scene showed the car, a 2008 four-door Honda Accord, surrounded by debris and exercise equipment after it had smashed through the wall of the gym.

Investigators said the vehicle had been stolen out of Whittier a few days prior to the incident.

The gym, which the Crunch Fitness website says is open 24 hours a day on Tuesdays, Wednesdays and Thursdays, was open at the time of the crash.

The driver, later identified by the Sheriff's Department as 32-year-old Sergio Reyes, fled the scene and entered the passenger side of an awaiting vehicle.

Several witnesses followed behind Reyes and saw him get in the car, the Sheriff's Department said.

The unidentified witnesses, who were in their own vehicle, then followed the getaway driver through several city streets. Eventually, the getaway driver hit a curb and crashed near the intersection of Alicante Road and Manzanares Road in La Mirada.

The getaway driver fled the scene after the crash and has not been found, the Sheriff's Department stated.

Authorities detained Reyes at the scene and arrested him on suspicion of attempted murder and taking a vehicle without an owner's consent.

Investigators said Reyes was a “disgruntled former member of the fitness club.” They did not elaborate on why Reyes was upset.

No injuries were reported in the incident.