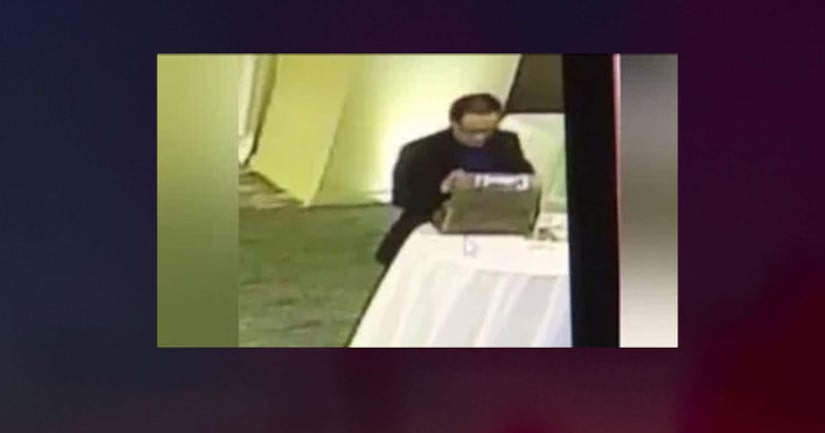 MONROVIA, Calif. (KTLA) -- A local couple is shocked and upset after what was supposed to be the greatest day of their lives.

It was a brazen theft with 100 wedding guests around. Video captured Saturday at the Doubletree by Hilton Hotel in Monrovia shows a wedding crasher, in a suit, pacing around the venue.

He is seen grabbing a box off a table and walking away. The newlywed couple says that box was filled with cash gifts that friends and family left for them.

"Sometimes it's tradition just to bring a lot of money and envelopes. And then Culture-wise, there are a lot of people that bring the red envelopes," the groom Anthony Nolasco said. "We thought it was safe. Unfortunately there's bad people out there."

Anthony noticed the box was missing toward the end of the night and called hotel security. He was shocked to see the video of a stranger holding their gift box.

"I'm the first one that saw it. I didn't want to upset my new wife. Kept going with the ceremony. Then we called police," Anthony said.

It may be a long shot, but they're hoping the man in this video will have a change of heart and return their gifts.

The exact amount stolen is unknown, but the police report says the loss is estimated at $10,000. If caught, this suspect could face a charge of felony grand theft.

MORE: Newlyweds Shocked After Wedding Crasher Seen in Video Walking Off With Box of Cards - KTLA