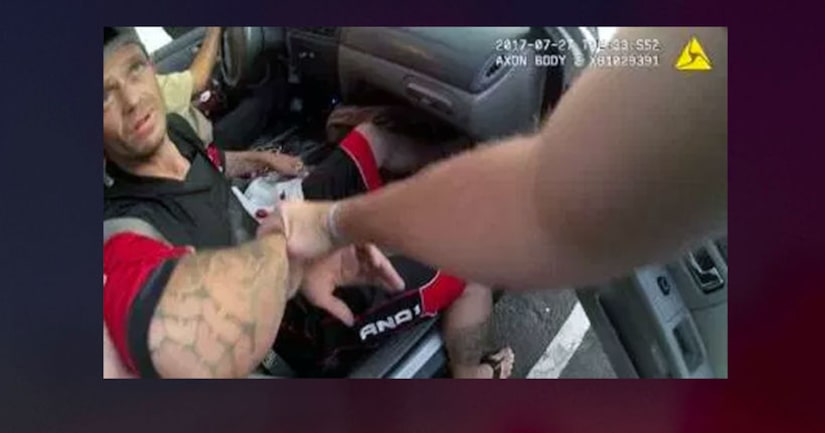 GLENDALE, Ariz. (KSTU/CNN) -- Johnny Wheatcroft is entangled in his seat belt the first couple of times Glendale, Arizona, police use a Taser on him.

By the end of the video, Wheatcroft's pants are down, his kids are screaming and an officer appears to have the Taser on or near Wheatcroft's genitals as he threatens to use it on him again.

Wheatcroft last year sued the officers and the city over the July 2017 incident, and video obtained by CNN last week shows the altercation.

The Glendale Police Department said in a Friday statement that Wheatcroft's wife, Anya Chapman, who was in the back seat, swung a bag of bottled drinks at Officer Mark Lindsey, knocking him out. The couple's children, ages 6 and 11, and the driver, family friend Shawn Blackburn, were also in the car.

Video from a parking lot surveillance camera that shows Lindsey being injured captures three officers surrounding a silver Ford Taurus. A white bottle flies out of the back seat, hitting Lindsey, who grabs his forehead and falls backward out of view, below the open passenger door.

Wheatcroft, police said, reached his hands into a backpack, raising officers' suspicions. He then repeatedly resisted officers' attempts to remove him from the car, they said.

“For the safety of themselves and those around them, including the minor children, the officers attempted to remove Mr. Wheatcroft from the vehicle so they could maintain a safe eye on him for the duration of the traffic stop as well as conduct a pat down for weapons,” the Glendale police statement said.