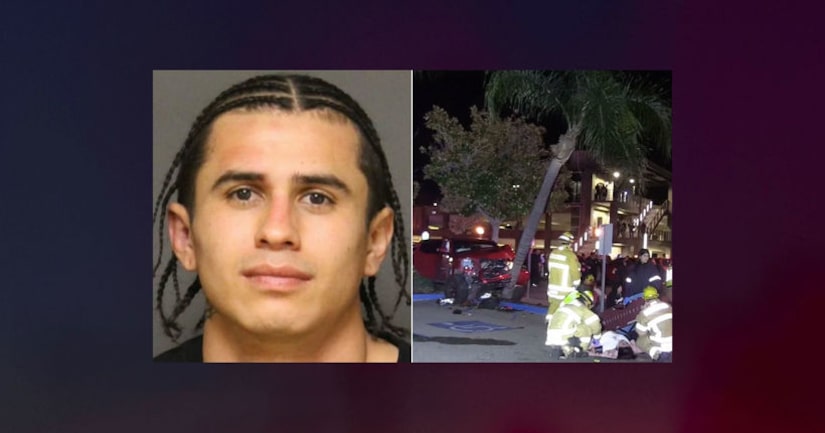 FULLERTON, Calif. (KTLA) -- Authorities said a DUI suspect plowed into a crowd in downtown Fullerton early Sunday, injuring nine pedestrians, some of whom became trapped underneath the driver's pickup truck.

Fullerton police responded around 1:50 a.m. to reports of multiple pedestrians who had been hit by a red Toyota Tacoma in the area of 100 W. Santa Fe Ave.

According to authorities, the Tacoma struck nine victims and hit a tree before coming to rest on the sidewalk.

"Multiple victims were trapped underneath the Toyota Tacoma, which was smoking, had serious front end damage, and its airbags deployed," a police statement said. "With the help of some nearby Good Samaritans, FPD officers were able to lift the Toyota Tacoma enough to free the pedestrians who had been struck and were now stuck underneath it."

Officers performed life-saving measures on the pedestrians before Fullerton fire arrived at the scene, the Police Department said.

The agency said the victims, ages 18 to 49, were taken to trauma centers with moderate to critical life-threatening injuries. Officials said a total of 10 people were hospitalized, but did not indicate who the 10th person was.

Police identified the driver as 22-year-old Christopher Solis of Anaheim. He's suspected of driving under the influence of drugs at the time of the crash. Officers arrested him on suspicion of felony DUI causing great bodily injury.

"Due to the time and location of where this accident occurred, hundreds of people were on the sidewalk, in the parking lots, and to the front of nearby restaurants and bars during bar closing time," police said.