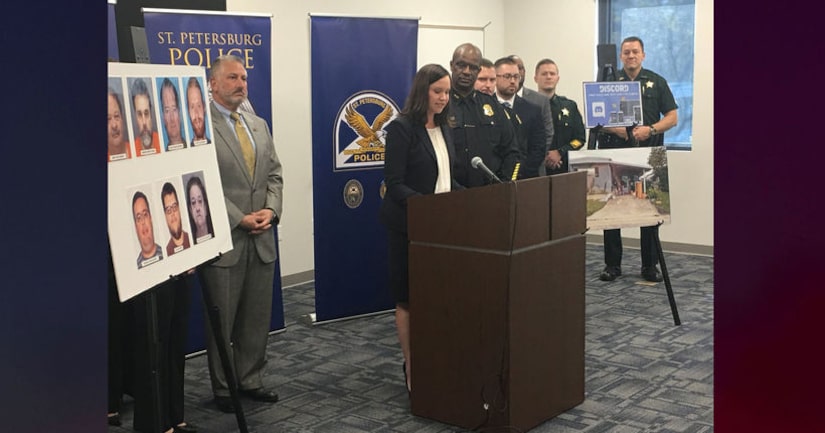 ST. PETERSBURG, Fla. (WTIC) -- Police have arrested seven suspected human traffickers after a 16-year-old boy who had been missing for nearly a year was found in a “filthy” trailer St. Petersburg, Florida.

“The teenage victim in this case was lured with promises of a better life,” Florida Attorney General Ashley Moody said at a press conference Monday. “Instead, he was moved into a filthy trailer and used as a sex slave for nearly a year.”

The investigation began on May 9, 2018 after Louisiana officials contacted police in St. Petersburg with information about another missing boy, 17, who they believed had been lured through the online gaming app Discord.

According to police, the suspects used it to communicate with the teen, who they picked up and drove to St. Petersburg.

When investigators went to a mobile home in North St. Petersburg where Louisiana authorities said he was, they found both teens living in the trailer with four men, Mark Earl Dennis, Andrew Barry Dennis, Curtis Lee Gruwell and Michael Wayne Schwartz.

Dennis initially told authorities he was the 16-year-old's father, which turned out to be false, police said.

The 16-year-old, from Marion County, Florida, was 15 when he disappeared. Police say his family found a note from her son saying not to look for him. Investigators now believe one of the suspects, Eleanor Faye McGlamory, had befriended the boy and lured him to the trailer.

“For the next year, he was introduced to sadomasochism and used as a sex slave by Mark and Anddrew Dennis, Gruwell, Schwartz and their associated, Michael Ray Blasdel and JR Gauthier,” police said in a news release. During the time he was held in the mobile home he did not attend school and wasn't given medical treatment, according to police.