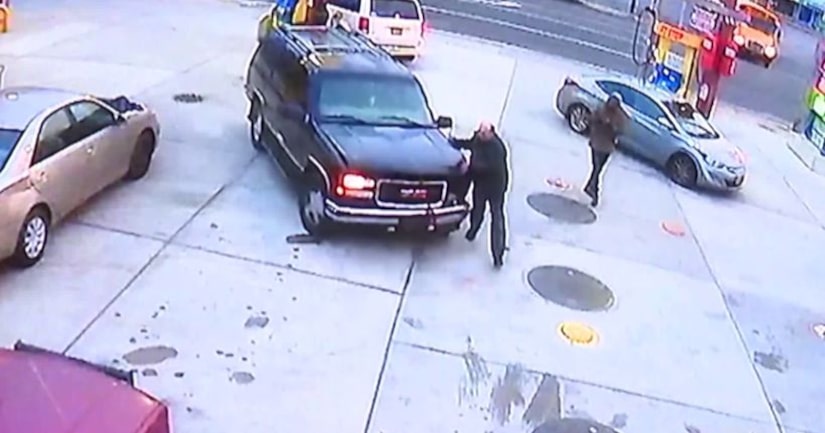 LONG ISLAND, N.Y. (WPIX) -- Police on Long Island are looking for the driver of a black SUV who ran over and killed a gas station manager early Monday morning.

The driver was trying to leave without paying for $22 worth of gas, according to the Nassau County Police Department.

"He was trying to ruse them. You know, trying to get that opportunity that he could jet out of there without paying," Detective Lt. Stephen Fitzpatrick said.

He was trying to stop the driver from leaving.

The suspect was acting strangely at the full service pump, so only the $22 was pumped, police said. Even though he had waved a $50 bill, he said he had no money and police said he tried to pay with a fake credit card. When that didn't work, he tried to flee.

As Dagdieviren tried to stop him, the suspect accelerated the vehicle, striking and killing the married, 59-year-old father of two.

The vehicle had no license plates and registration, police said. The driver's side headlight is out and there is front-end damage.

Police described the suspect as over 6 feet tall with a thin build. He is likely in his 30s and wears his hair in long dreadlocks. The driver was last seen wearing black cargo pants, a grey hooded sweatshirt, a bright orange hat and work boots.

The vehicle was last seen going southbound on Grand Avenue.

Anyone with information is urged to the Nassau County Crime Stoppers Hotline at 1-800-244-TIPS.