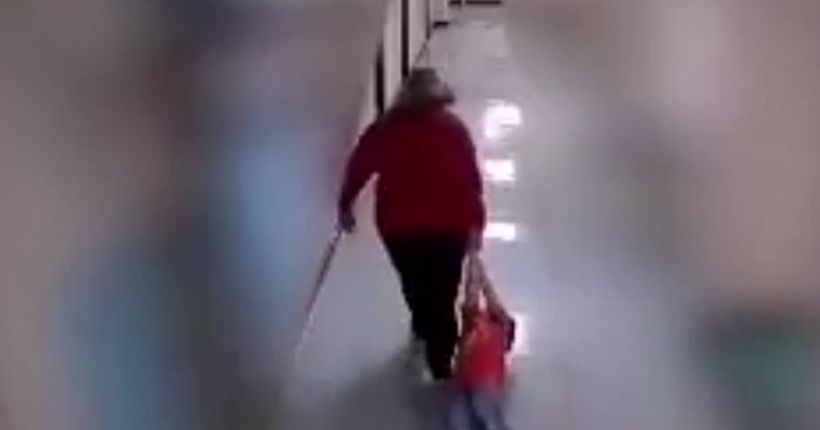 WHNT
A teacher has been charged with assault after a video showed her dragging a 9-year-old boy with autism through the halls of a Kentucky school.

KENTUCKY (WHNT/CNN) -- A teacher has been charged with assault after a video showed her dragging a 9-year-old boy with autism through the halls of a Kentucky school.

The Greenup County School District on Monday announced the termination of a teacher, whom it did not name, more than two months after the October incident, CNN affiliate WSAZ-TV reported.

The boy’s mother, Angel Nelson, told CNN on Monday that her son was removed from a classroom after he had an outburst.

Video from the school’s cameras, which Nelson shared on Facebook, appears to show a woman dragging a young boy by the wrists through the school’s hallways. At different points in the video, the boy is either lying on his back or sliding on his knees.

Nelson’s son has been diagnosed with “autism, ADHD, PTSD, anxiety and depression. In addition, his speech is also limited,” she said in a Facebook post. The boy is prone to “experiencing a meltdown” because of his diagnoses, she said.

Nelson and her family had just moved into the district in October, WSAZ reported.

“He’s trying to adapt and make friends,” she told CNN.

Nelson said her son got frustrated after a teacher told him to keep working, or to do more work, when he wanted to take a break.

Abrams grabbed Nelson’s son by the wrist and bent it backward, the mother said.

The camera inside the classroom was turned toward a corner, Nelson said, so there’s no video of what happened there. Her son said the teacher threw him down hard onto a chair, Nelson wrote in her Facebook post.

“We will never truly know what took place behind that closed door because of my son’s speech limitations,” Nelson wrote on Facebook. “This incident was violent enough to not only injure my child, but to also destroy his shoes.”

Abrams then dragged the boy down the hallway “from one classroom into another,” Nelson said.

On the same day her son was dragged, Nelson had X-rays taken of his wrist and tailbone, she said.

“The doctor diagnosed him with a possible left wrist fracture,” she said, adding her son also had an MRI scan of his wrists.

“He had a confirmed sprain in one of his wrists,” she said. “In the days following, he suffered swelling and bruising around his wrist.”

The injuries will cause her son emotional trauma, Nelson said, noting the teacher also humiliated him in front of other students.

“She made him feel different,” Nelson said.

The child, Nelson said, will need to have “more intense occupational therapy to regain his skills that took so long to grasp.”

FULL STORY: Teacher charged with assault after video shows her dragging boy with autism through a Kentucky school - WHNT