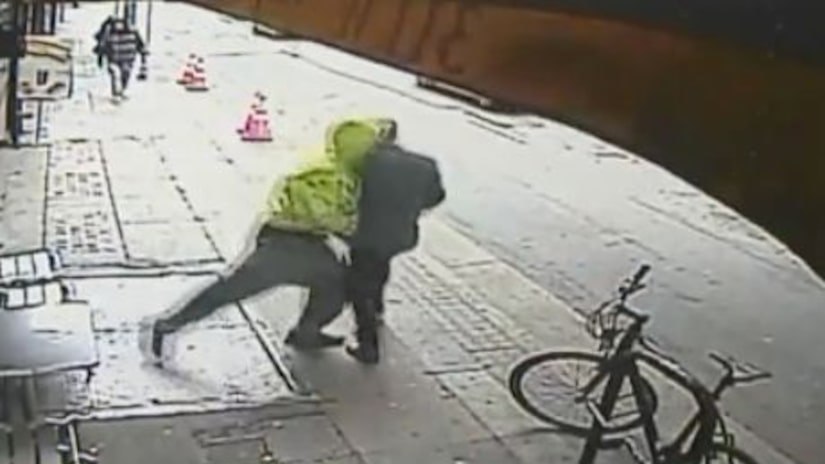 LOS ANGELES -- (KTLA) -- A suspect accused of pushing another man into a downtown Los Angeles street, where the victim was critically injured after becoming pinned beneath a box truck, was in custody Wednesday night in connection with the caught-on-video incident, officials said.

The video, which L.A. police said was captured around 10:45 a.m. on the 300 block of West Sixth Street, shows the victim walking along the sidewalk when a man sitting on a nearby bench jumps from his seat and hurls him into oncoming traffic, apparently unprovoked.

It occurred at the exact moment a box truck was driving by, and the victim was lodged underneath its front left tire for at least 10 seconds before the truck's driver realized what happened and backed up.

The suspect, meanwhile, is seen picking something up off the ground and walking away. It appeared the item may have flown off the victim's body as he fell.

The footage was captured on security cameras in front of Sultan Chicken, a Mediterranean restaurant on the block.

The victim was taken to the hospital with a collapsed lung and broken bones, LAPD Officer Tony Im said. Officer Mike Lopez said the man remained in critical condition Wednesday night but is expected to survive.

The victim has not been identified, but Im described him as an Armenian man believed to be in his 60s.