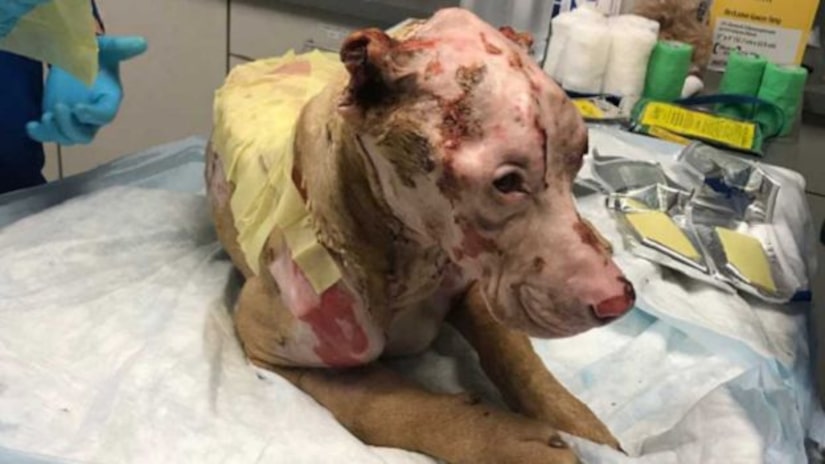 INDIANAPOLIS -- (WXIN) -- Authorities are asking the public's help for information on what happened to “Justice” the dog, who was found severely burnt in Shelby County last month.

He was found wandering on a Shelby County road with chemical burns all over his body on Friday, Nov. 2.

On Tuesday, the Shelbyville Animal Shelter released a heartbreaking update about Justice:

“I wanted to finally update you on our sweet Justice as it has been awhile. The first picture was taken on Saturday, November 3 when he first entered IndyVet Emergency & Specialty Hospital. The final two pictures were taken in the past several days, which shows Justice without his bandages. The chemicals caused his skin to die and slough off. Later they realized it was best for the surgeon to debride all of the dead tissue. We have been seeing Justice a lot (thanks to Jarrika's pictures) of him wrapped like a mummy in his bandages. As you can see, he is starting to grow healthy tissue. They aren't sure if his fur will grow back completely, but he does have some peach fuzz coming in on his darling chin. Regardless, he is the most beautiful dog in the world. The staff at IndyVet are quite pleased with how he is progressing and with his healing process. He still has his catheter in place and they are continuing to change his bandages every-other-day.

“Currently, Justice is back at IndyVet as he was vomiting and they felt it was best to admit him. Today is his second day at IndyVet and if it all works out, he will be able to return tomorrow night to Jarrika's home.”

The Shelbyville/Shelby County Animal Shelter is offering a $10,000 reward for information leading to the arrest and conviction for the person or people responsible for Justice's injuries.

To be eligible, email your tip to cbrowder@cityofshelbyvillein.com.