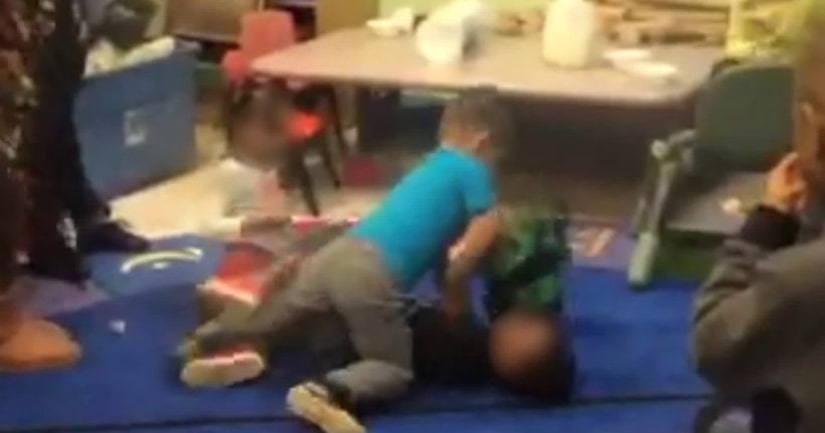 ST. LOUIS -- (KTVI) -- Teachers at Adventure Learning Center on Gravois organized a one-day fight club for preschoolers in December 2016. The lead teacher organized it after the heater broke in an attempt to entertain the kids.

A 10-year-old captured video of the fighting with his iPad. He was with older kids in the next room. He was worried about his little brother who was crying after three fights.

In the video, you can see one teacher who appears excited as she's jumping up and down. You can see another teacher putting hulk fists on preschoolers.

Mother Nicole Merseal cannot watch without crying. She told us, “He doesn't understand why his friends were fighting him -- why he was beaten up by his best friends. And it was on his 4th birthday.”

The iPad video shows a fight in which the kids fall to the ground while a teacher kicks into the air in excitement. The only person who tries breaking it up is another preschooler, but he cannot stop one child from pounding the other's head into the floor. Merseal believes it only stopped because her older son texted her video. She called the director to stop it. She said her older son texted the video saying “The daycare was making them fight, not helping them.”

Though it happened nearly two years ago, Merseal doesn't think enough was done. She said, “I want them to be held accountable and I don't want this to happen to any other child.”

The St Louis Circuit Attorney's Office provided the following statement about declining to prosecute the teachers, "There was insufficient evidence to prove beyond a reasonable doubt that any laws were violated. However, that does not diminish the incredibly poor judgment by these adults who had the responsibility to safely supervise these children."