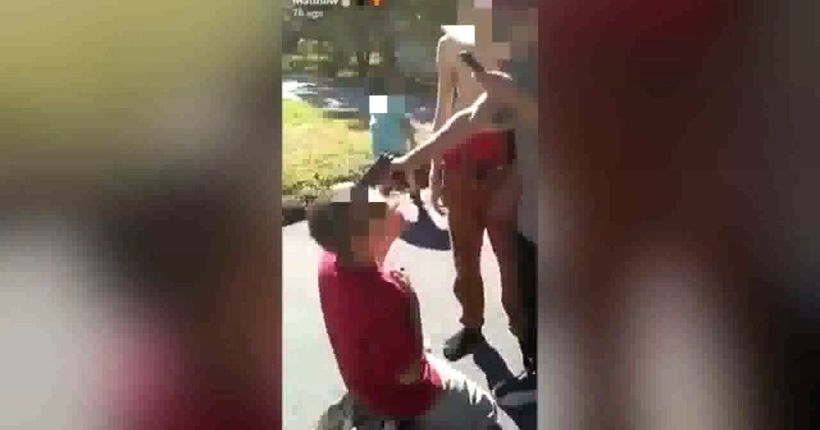 WDAF / Emily Bridges
Independence Police have a 17-year-old and two minors in custody after a video showing someone pointing a gun at a 13-year-old circulated on social media.

INDEPENDENCE, Mo. -- (WDAF) -- A Independence mother is furious after kids were caught on video bullying and holding a gun to to her son's head.

Independence Police have a 17-year-old and two minors in custody after a video showing someone pointing a gun at a 13-year-old circulated on social media.

The 17-year-old turn himself in to police Tuesday. Detectives are questioning him and the others about the video.

The boy held at gunpoint was a 13-year-old boy in the seventh grade. His mother, Emily Bridges, said he's on the autism spectrum.

Bridges didn't know why her son Darren came home with bruises on his face Saturday. She didn't get answers until her younger son showed her a video.

The video shows Darren kneeling. Other kids are yelling at him to kiss their feet. They use racial slurs. And then, someone pulls out a gun and holds it against Darren's head.

Bridges went to police Monday and said, at first, they didn't seem concerned about what happened to her son.

"He just really said that they're minors. There`s not a lot that happens to them," Bridges said. "They have to do community service. There's not a lot. I should just keep Darren away from there and keep him at home."

But on Tuesday, Bridges went back to police looking for someone to take responsibility.

After the gun was pulled, another person in the video threw punches at Darren. Bridges said the people who assaulted her son also stole money from him.

Bridges said her sons have been victims of violence before, and she wants other parents to step up.

The video of her son's assault made the rounds on social media. Bridges thanked the community for their concerns -- and wants the video to send a message to other kids and teens.