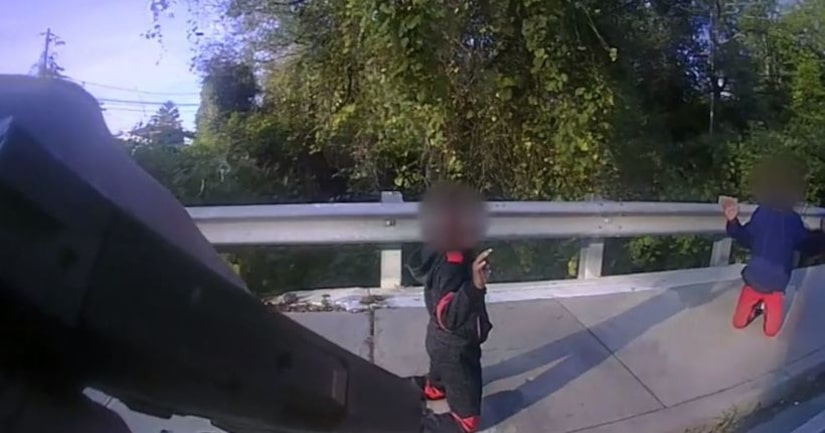 COLUMBUS, Ohio -- (WJW) -- Officer Peter Casuccio drew his weapon as he approached two young boys suspected of having a gun. He ordered them to stop, turn around and show him their hands.

A scared 11-year-old pulled out what appeared to be a firearm from his waist and tossed it. The gun broke into pieces on a sidewalk on the north side of Columbus, Ohio, on Saturday. It was then Casuccio said he realized the weapon was a BB gun.

In that split second, the officer showed restraint in the encounter, which was captured on a body camera video released Monday by Columbus police. He didn't fire his weapon. Instead, Casuccio, who is a father, said he went into “dad mode” and used the moment to teach the 11-year-old, who is African-American, a lesson.

The peaceful encounter took place more than 100 miles south of Cleveland, where former Cleveland police officer Timothy Loehmann in 2014 shot and killed 12-year-old Tamir Rice, who was African-American, after a witness called 911 to report that someone was brandishing a gun in a park.

In an interview with CNN, Casuccio, 37, said he had just passed the pair when the 911 call came reporting several African-American boys waving a gun. He recalled seeing two boys who fit the description in the call. He approached them with his gun drawn, believing they were armed based on the call.

Casuccio said he slowly got out of his car “because I'm assessing whether I have to shoot or not.” The 11-year-old was walking with a 13 year-old boy.

He said the 11-year-old “kind of panicked” when he pulled the BB gun from his waist.

“I could tell they were both scared, so I thought it was a teachable moment,” said Casuccio, who told the boys to sit on a railing as he talked.

“This is getting kids killed all over the country,” Casuccio told them, according to the footage from Columbus police.

In the exchange, the 11-year-old said he didn't flash the gun but was holding it, running with it, he said, slightly lifting his hands from his side.

“You can't do that, dude, in today's world. Listen, that thing looks real,” Casuccio said to the boy, who apologized.