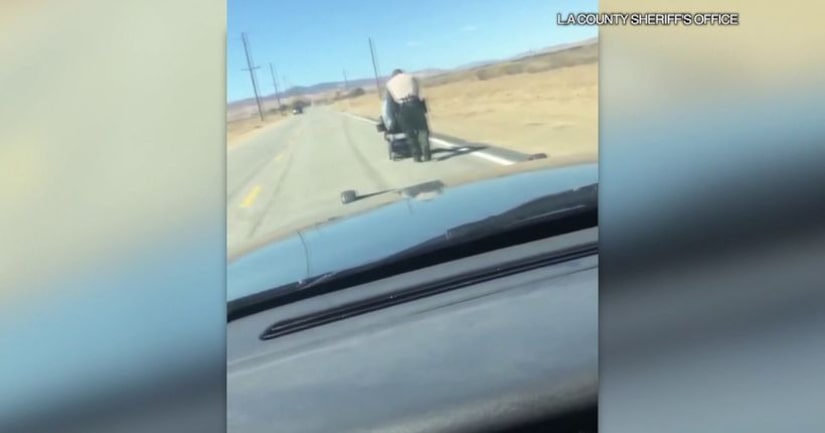 LANCASTER, Calif. -- (KTLA) -- A woman who became stranded when her motorized wheelchair stalled on the side of a road made it safely back to her Lancaster home thanks to a couple of L.A. County sheriff's deputies, including one who pushed her the full mile to her residence, authorities said this week.

Deputies Steve Montanez and Shane Chapman responded on Sunday after receiving a report of a wheelchair in the middle of the road, which was described as a "traffic hazard," according to a post on the Lancaster Sheriff's Station Facebook page Tuesday.

They arrived to find an "elderly" woman sitting in a wheelchair on the side of the road, according to the post. Her motorized wheelchair had run out of power, stranding her on the roadway.

The deputies initially offered to drive her home, but the woman because upset at the thought of leaving the wheelchair behind, as it was her "only means of mobility," the post stated.

At that point, he went the extra mile -- literally, as that was the distance to her home -- and decided to push her the full way.

Video taken by Chapman and posted on the sheriff's Facebook page showed Montanez, dressed in full uniform and boots, pushing the woman on what appears to be a highway in a remote area.

At one point, Chapman can be heard teasing Montanez about the "slow" pace, prompting a laugh from the woman.