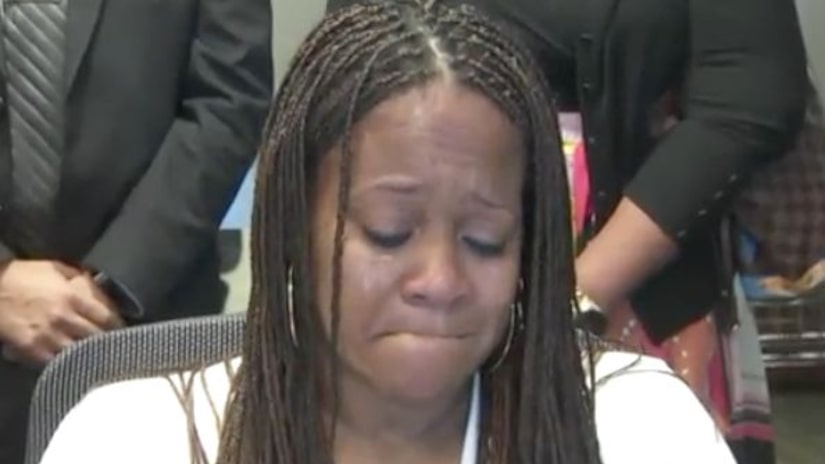 ROLLING HILLS ESTATES, Calif. -- (KTLA) -- Five months after her arrest and subsequent release from jail, Cherie Townsend announced Monday she is taking legal action against authorities in Los Angeles County for falsely arresting and accusing her in the May stabbing death of a retired nurse in Rolling Hills Estates.

Townsend's attorney, Nazareth Haysbert, said at a news conference on Monday his team has filed claims for damages on Townsend's behalf alleging humiliation, physical and emotional distress, false arrest and imprisonment, ahead of a lawsuit, for the handling of the investigation by the Los Angeles County Sheriff's Department and Sheriff Jim McDonnell.

"They took her DNA, collected all the evidence they could find from the car, yet my client is still here with me so that should tell us something. My client is right here sitting next to me, where is the murderer of Susan Leeds?" Haysbert said. "When asked if they regretted making the announcement of Miss Townsend's arrest so early, Sheriff McDonnell said and I quote, 'No.'"

Townsend, 40, was accused of fatally stabbing and slashing the throat of 66-year-old Susan Leeds in the parking garage of the Promenade at the Peninsula mall on May 3. The case against her was later rejected by prosecutors due to insufficient evidence and charges were never filed. But Townsend said she is still dealing with the emotional trauma she suffered from being arrested at gunpoint, questioned by detectives, spending several days in jail and being labeled a murderer in the media.