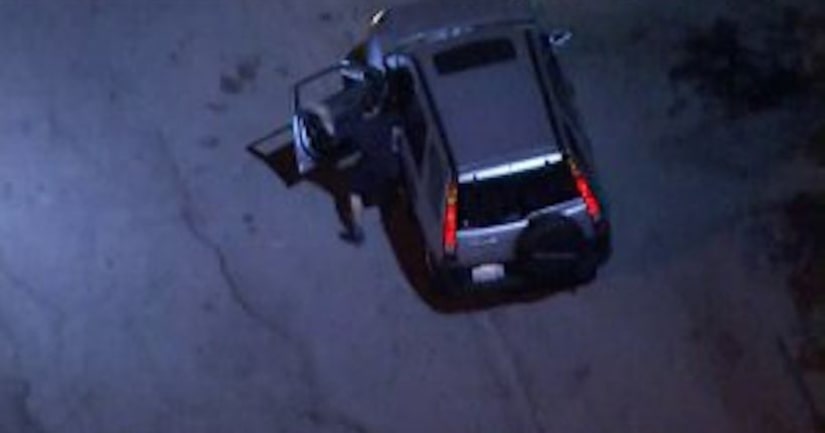 N. HOLLYWOOD, Calif. -- (KTLA) -- A person described by the Los Angeles Police Department as a possible murder suspect led officers on a chase through the North Hollywood area Monday night — before finally surrendering after appearing to carjack someone and taking off in their vehicle, as Sky5 video showed.

The suspect was seen in Sky5 video swerving in and out lanes, running multiple red lights and nearly hitting other vehicles throughout the chase, which started in Sun Valley and ended in North Hollywood. It also extended into the Burbank area at some point.

LAPD Officer Mike Lopez described the driver in the pursuit as a possible murder suspect. The chase began near the intersection of Lankershim Boulevard and Saticoy Street in Sun Valley at 7:20 p.m.

According to the Los Angeles Times, two people were arrested after the chase.

After evading police for 40 minutes, the suspect jumped out of the vehicle when it was seen hitting a dead end at about 8:02 p.m.

It had just drove along Laurel Canyon Boulevard before turning onto Hart Street.

Dressed in all black, the suspect could be seen walking into what appeared to be a parking lot filled with vehicles just two minutes after jumping out of the vehicle.

Still going through the lot, the suspect started to run toward a silver SUV on the side of the road with its rear lights on and then tried opening the SUV's driver side door. Once the door swung open, the SUV's driver jumped out and started running away as the suspect ran around to the passenger side.

FULL STORY: Suspect in LAPD pursuit in North Hollywood surrenders after jumping into another vehicle - KTLA