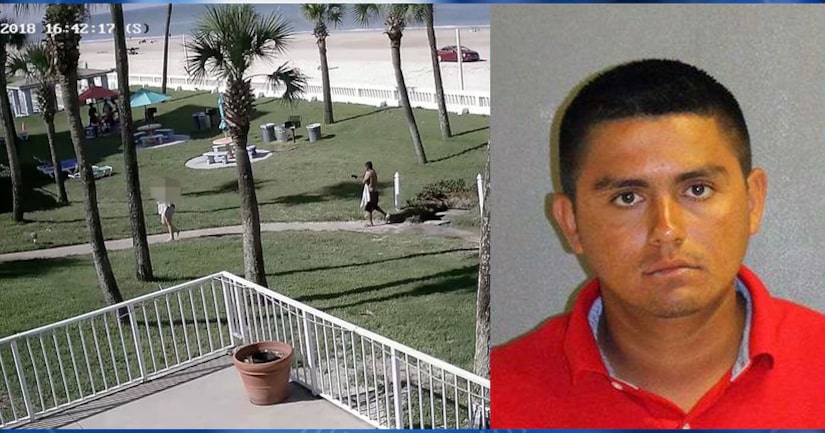 DAYTONA BEACH SHORES, Fla. -- (WKMG) -- A man accused of raping a 14-year-old girl at a hotel told detectives he thought it was "OK" to follow her, even though the two had never spoken, because he exchanged glances with her by the pool, according to Daytona Beach Shores police.

Police were called to the resort on Sunday afternoon after hotel staff members said a guest told them her daughter was raped. The girl told police that a man on the elevator with her "came on to her" and groped her. When she got off the elevator she ran to her hotel room. Soon after, the victim said she heard footsteps in the hallway and thinking it was her parents, opened the door. The man pushed his way into the room, removed her clothes and raped her, according to the report.

Two surveillance videos released by Daytona Beach Beach Shores police show the suspect following the victim from the pool deck into the resort building and then into the elevator. Outside, the man followed her about 10 to 15 feet behind and the two never speak, according to the video.

Police identified the suspect as Nelson Hernandez-Garcia, 23, of El Salvador, because after the alleged assault he put his number in the victim's phone and called or texted himself. Police said he called the victim three times and texted her in the hours after the incident. She responded with a text telling him to leave her alone and that she was 14 years old, according to the report.

The suspect told detectives he didn't follow the victim for sex, but "just wanted to get to know her." Hernandez-Garcia is charged with sexual battery on a minor. Volusia County Jail records show he is held without bail.