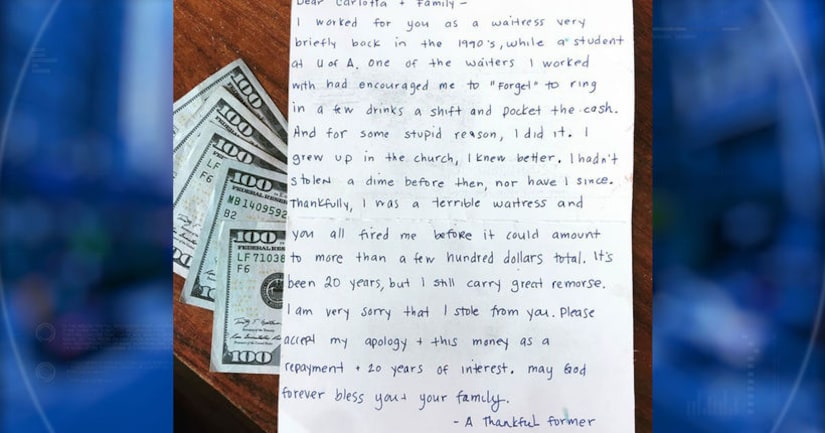 TUCSON, Ariz. -- (WPIX) -- With $1,000 in cash and a handwritten apology, a former waitress is trying to make things right after stealing money from a Mexican restaurant more than 20 years ago.

Carlotta Flores, who owns El Charro restaurant in Tucson, received a surprise envelope in the mail last week. A woman who had worked for Flores in the 1990s while attending the University of Arizona revealed that she stole money from the restaurant.

“One of the waiters I worked with had encouraged me to 'forget' to ring in a few drinks a shift and pocket the cash. And for some stupid reason, I did it,” wrote the woman who only identified herself as “a thankful former employee." “I grew up in the church, I knew better. I hadn't stolen a dime before then, nor have I since.

“Thankfully, I was a terrible waitress and you all fired me before it could amount to more than a few hundred dollars total,” the letter continued. “It's been 20 years, but I still carry great remorse. I am very sorry that I stole from you. Please accept my apology + this money as a repayment + 20 years of interest. May God forever bless you+ your family.”

Flores said the letter deeply moved her and her employees. Flores said she wants to send the woman her money back.

FULL STORY: A waitress stole money from her boss. Decades later, she sent back $1,000 and an apology - WPIX