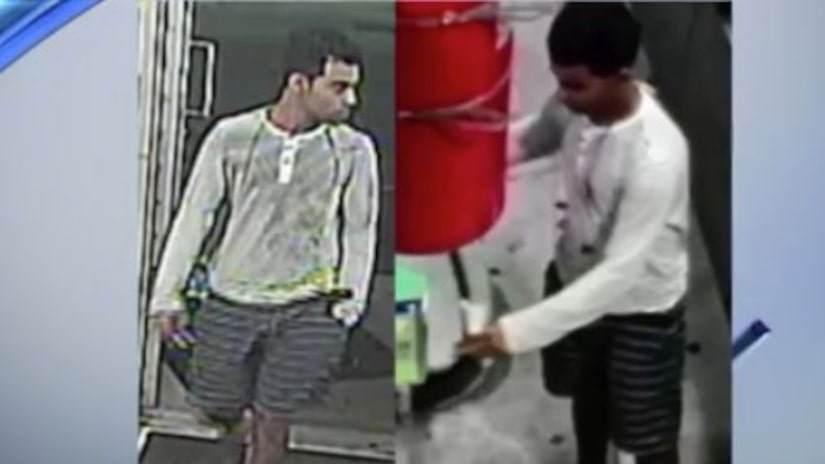 STATEN ISLAND, N.Y. -- (WPIX) -- A man apparently tried to blow up a Staten Island gas station, and almost got killed in the resulting fireballl.

Now, the search is on for the arsonist whose actions would have had far more hazardous results if safety systems required by law had not been in place, according to law enforcement sources. The situation could have been even worse -- catastrophic, even, according to some local residents -- if the flames had managed to spread much farther than they did.

The NYPD released surveillance video on Monday night of the emergency that had taken place at around 1:50 A.M. at the 24-hour BP filling station at the intersection of Richmond Avenue and Victory Boulevard here.

In the video, a man wearing a long-sleeved, light-colored or white shirt starts to fill up a red gas can he'd bought in the gas station's convenience store. As he pumps gas into the container, he sporadically sprays streams of gasoline around the gas pump and onto the cement at its base. Next, he pulls out a piece of paper, ignites it with a lighter and then flames burst out all around. The man flees, possibly having been burned himself.

"[I] don't know if he realizes he could blow himself up," said Bob Guarino, a regular customer at the 7-Eleven convenience store attached to the gas station.

He saw the surveillance video for the first time when PIX11 News showed it to him outside the 7-Eleven.

The same was the case for customer Arlene Gunderson.

"Oh my God," she gasped, watching the flames engulf Pump Number 10 in the surveillance video recorded by the gas station.

FULL STORY: Search is on for man who tried to blow up Staten Island gas station - WPIX