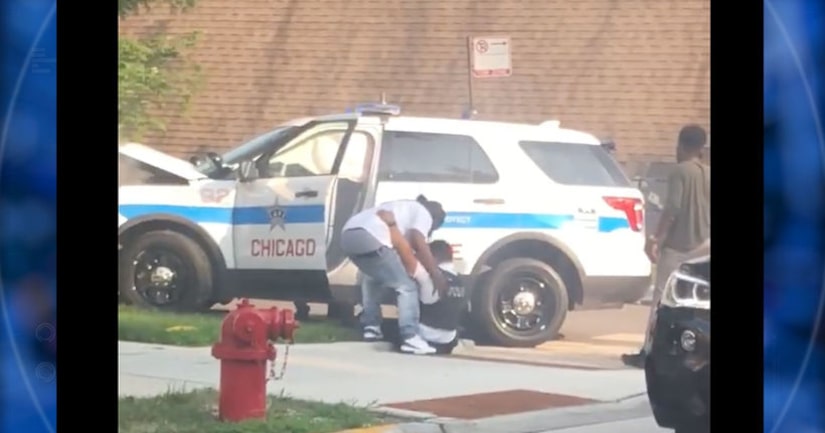 CHICAGO -- (WGN) -- Video that was posted on Facebook shows a group of Good Samaritans pulling a Chicago police officer out of a squad car after he crashed into a tree.

Police said officers were assisting on a foot pursuit on Tuesday in a marked squad car with lights and siren on, and a dark-colored SUV failed to yield to the officers and hit the squad car. In order to avoid a collision, the officer hit the brakes and slid into a tree on the 8200 block of South Jeffrey Avenue, police said. The driver of the SUV then fled the scene.

Kevin Russell posted the video on his Facebook page around 6:45 p.m. Tuesday. He said he was driving down Jeffrey Avenue after work when he saw the police car "flying down the street" when someone drove into the intersection. Russell said the officers crashed into a tree to avoid them.

In the video, a man can be seeing pulling the officer out of the car after the crash. Russell is heard asking if the officer is OK. Both officers in the car had minor injuries and were taken to Christ Medical Center.

"The officer is a human being, he's not just an officer or an object," Russell said.

"There's not all bad in the world. There's not. There's a lot of good. But we only look at the bad part. It has to get better," one neighbor said.

The man in the video helping the officer has not been identified.