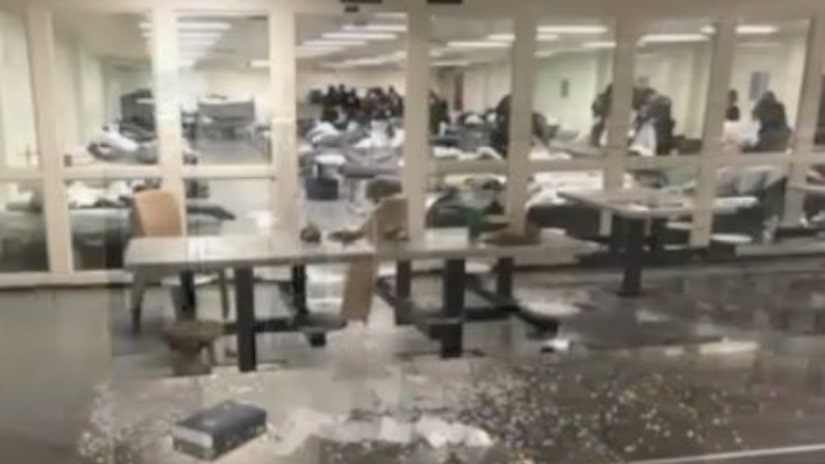 THE BRONX, N.Y. -- (WPIX) -— Eight alleged Trinitarios gang members destroyed a room at the Bronx jail barge, prompting a fearful correction officer to flee, after learning a friend would be moved to another facility, sources said Wednesday.

Upon learning a friend would be transferred to a different facility at Rikers Island, eight Trinitarios members allegedly became violent.

As the gang members destroyed a room and allegedly tried to flood the area, and slow down the response by other officers, by turning on water, a correction officer tried to stop them with pepper spray, the sources said.

The men then "turned on her," forcing the officer to run out of the room and lock the door in order to protect herself, according to sources.

Images obtained by PIX11 show a room filled with smashed windows, wrecked electronics on the floor and glass covering tables. A puddle of water is also seen on the floor.

When asked about the incident, Correction Officers' Benevolent Association President Elias Husamudeen railed against Cynthia Brann, the commissioner of the NYC Department of Correction.

“This is yet another example of how Commissioner Brann has lost control of the jails. She refuses to bolster security and she continues to execute the mayor's failed policies. As correction officers, we deserve better," a statement emailed to PIX11 on Husamudeen's behalf read.