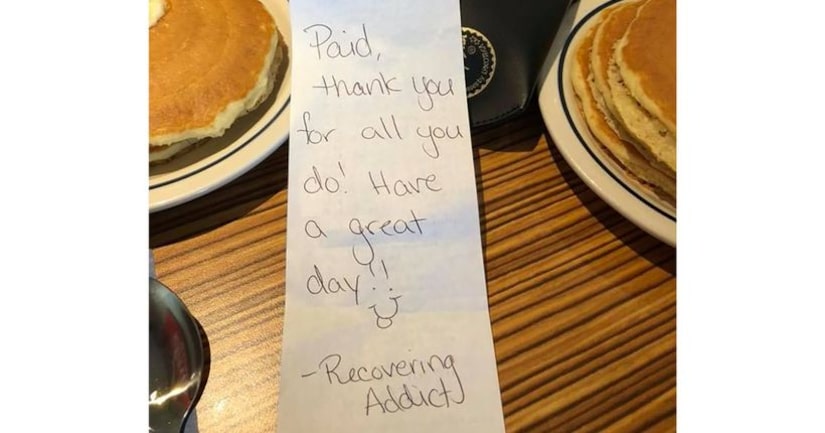 NEW JERSEY -- (WBBH/CNN) -- As they ate breakfast after a long night shift, a group of EMTs was brought to tears by a heartwarming surprise: Their meal had been paid for.

The six volunteers were dining at an IHOP in Toms River, New Jersey, on Friday when an anonymous woman paid their bill, leaving a moving message on the receipt.

"Paid, thank you for all you do! Have a great day!" the note said. It was simply signed: "Recovering Addict."

Alyssa Golembeski, captain of the Toms River First Aid Squad, said the general manager of the IHOP came to the EMTs' table to inform them that a woman had paid for their meal.

Golembeski said she asked the manager whether her team could thank mystery benefactor for breakfast, but the woman wanted to remain anonymous.

"We were all a little fried after Thursday night, and so Friday morning, getting that thank you note, it was the nicest thing anyone could have ever done for us," Golembeski said.

After breakfast, the Toms River First Aid Squad posted a photo of the receipt to Facebook in the hopes that the woman might see it, but she has yet to come forward.

"This gift was amazingly thoughtful, and brought our table of tired EMTs to tears," the squad posted on Facebook. "We are so blessed to be able to serve you and everyone else who lives and works in the greater Toms River area. Good luck on your journey of recovery!"

Golembeski says she and her team have two messages for the woman's act of kindness:

"First of all, thank you for buying our breakfast and for literally making my whole week," Golembeski said. "I couldn't stop smiling that entire day. Second of all, I just want to commend you for getting into recovery and for beating the disease that is addiction."

Although it's not known what kind of addiction the anonymous woman had, Golembeski said the opioid crisis is especially bad in New Jersey, making her message that much more meaningful.