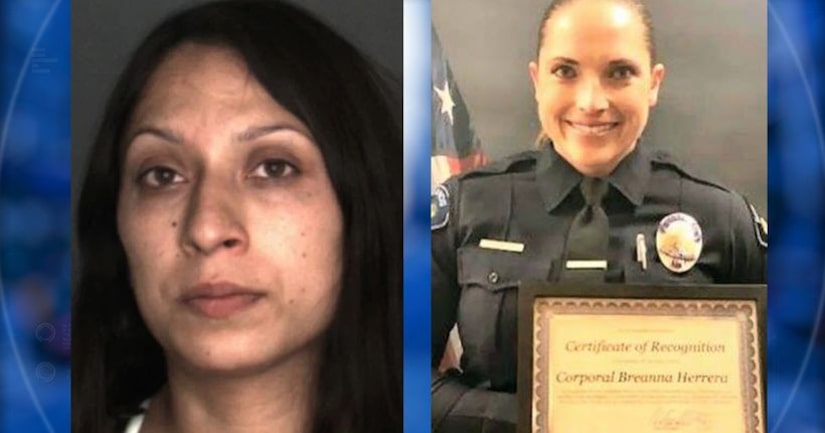 SAN BERNARDINO COUNTY, Calif. -- (KTLA) -- A mother has been arrested after she allegedly left her children in a locked car on a scorching hot day in Redlands recently, and the police corporal who rescued the distressed children is being honored for her actions, authorities announced Thursday.

Cpl. Breanna Herrera responded to the Mountain Grove shopping center after 911 dispatchers received calls regarding children locked inside a vehicle around 12:30 p.m. Saturday, according to a Redlands Police Department news release.

When she arrived at the center, located at 27511 W. San Bernardino Ave., she was met by the children's mother, who told Herrera that her keys were locked in the vehicle, the release stated.

The mother, identified as 26-year-old Danielle Marie Sulprizio, went on to tell the corporal that the kids had not been in the car for that long. She added that she was waiting on a relative with a spare key and didn't want to break the car's window, police said.

When Herrera spoke with witnesses, however, they told the corporal the children had been inside for at least 15 minutes.

She looked inside the vehicle and saw that the two young children — a 2-year-old and a 3-week-old — were not moving. Temperatures outside were also nearing 100 degrees.

Fearing for their safety, Herrera broke the car's front window. Once inside, she found the toddler was lethargic and distressed, while the infant wasn't moving, according to the release.

After getting them out of the sweltering vehicle — the interior temperature measured at least 138 degrees — Herrera immediately began to render medial aid on the 2-year-old. Meanwhile, Redlands Fire Department paramedics arrived on the scene and treated the newborn.

Paramedics transported the children to a local hospital, where they were last reported to be in stable condition. Both have been taken into the custody of child protective services.

Sulprizio was arrested that day on suspicion of child endangerment, police said. She was released on bail early the next morning, jail records showed.

A court date has not been scheduled, and it was not immediately clear if San Bernardino County prosecutors filed charges in the case.

On Wednesday, Herrera was honored by Redlands City Manager N. Enrique Martinez and Police Chief Christopher R. Catren for rescuing the children. She will also be recognized at a future City Council meeting, according to the release.