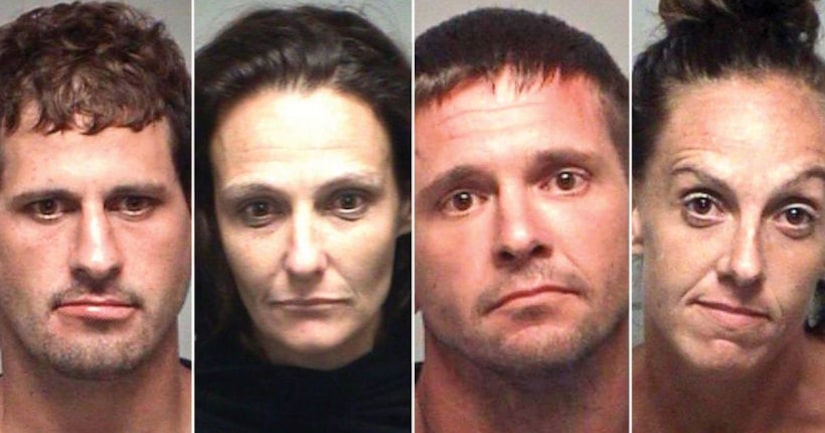 LAKE COUNTY, Fla. -- (WKMG) -- Four people have been arrested after deputies said they left two children alone overnight. The children were found locked outside a trailer without food and water, and a third child was found lying in the back seat of a car without a diaper or car seat, according to officials from the Lake County Sheriff's Office.

Britni Wilson, Lane Griffith, Darryl Pulley and Tiffany Allen were arrested on charges of child neglect. Officials said they also found methamphetamine on one of the suspects.

Deputies said they were called to the Clerbrook Golf and RV Resort in Clermont on Wednesday on a report of two children, a 7-year-old and a 10-year-old, who said they could not get in touch with their parents.

Deputies arrived around 1 p.m. and found the children locked out of their trailer with no food or water, complaining of heat. The children said their parents had been away since "around dinner time" the night before, according to the LCSO arrest report.

Authorities said after unsuccessfully trying to locate the children's caregivers, four adults drove up the scene with the third child unrestrained in the back seat. When deputies interviewed the suspects, they said they had left the children in Lake Louisa State Park with friends and did not know they had returned home.

The arrest report said the caregivers could not elaborate on who the friends were and said they had not seen the children for "about two days." Two of the suspects said they were not "these type of people" and that what they had done was "messed up," according to the arrest report.

Deputies said that while they were arresting the suspects, Allen was holding a piece of plastic that tested positive for methamphetamine.