LOS ANGELES -- (KTLA) -- A 30-year-old woman has been arrested in the vicious Fourth of July beating of a man in his 90s who was walking in the Willowbrook neighborhood of South Los Angeles, authorities announced Wednesday.

Laquisha Jones, a resident of Los Angeles, was arrested without incident near 60th Street and Crenshaw Avenue about 10 p.m. Tuesday night, the Los Angeles County Sheriff's Department stated in a news release.

Jones is allegedly involved in the assault on Rodolfo Rodriguez in the area of 118th Street and Robin Street in Willowbrook, an unincorporated area of Los Angeles County.

Investigators initially believed Rodriguez may have bumped into a young girl with Jones when she started to assault him.

However, Rodriguez denies ever bumping into the little girl and says he was beaten with a concrete block.

“I just passed her and she pushed me and she hit me until she was done,” Rodriguez said.

Rodriguez had traveled from Michoacan, Mexico, to visit his family, his grandson Erik Mendoza said.

A witness told CNN she saw a woman striking Rodriguez and overheard her saying, “Go back to your country. Go back to Mexico.”

Rodriguez says he will turn 92 in September and has never been hurt like this. Family members earlier said Rodriguez was already 92 years old.

Jones has been booked on suspicion of assault with a deadly weapon and is being held on $200,000 bail, the Sheriff's Department stated.

Investigators have recovered the weapon believed to have been used in the attack.

Detectives are trying to determine if there are more suspects involved in the case, according to the news release. 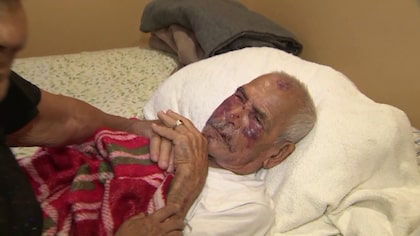 Man, 92, allegedly beaten with brick, stomped on Fourth of July