LIBERTY, Mo. -- (WDAF) -- The mother of two girls who were found dead outside of their Kearney home on the Fourth of July appeared before a judge Monday to answer to charges not related to the girls deaths.

The families of 2-year-old Ireland Ribando and her 7-week-old sister Goodnknight Ribando packed the Clay County court room and sobbed when the girls' mother appeared before a judge.

The family of the girls walked out without comment after the first appearance of Jenna Boedecker. She is charged with third degree domestic assault, armed criminal action and property damage for a fight with her husband the night of July 3. Boedecker allegedly threw a brick at her husband and rammed a truck he was driving with her Jeep.

In court, Boedecker told the judge, “I didn't mean to hit the truck, that wasn't part of it.”

The next day, July 4, after 11 a.m., Boedecker found Ireland and Goodknight outside of the family's home, not breathing. There is speculation that the 2-year-old and 7-week-old girls were left in her car.

The girls' father left after the July 3 fight and police say Boedecker was the only one home when the girls were found dead. As of now, she has not been charged with any crimes for the deaths of her daughters. 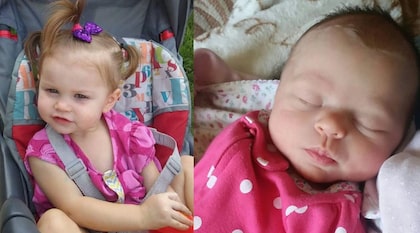