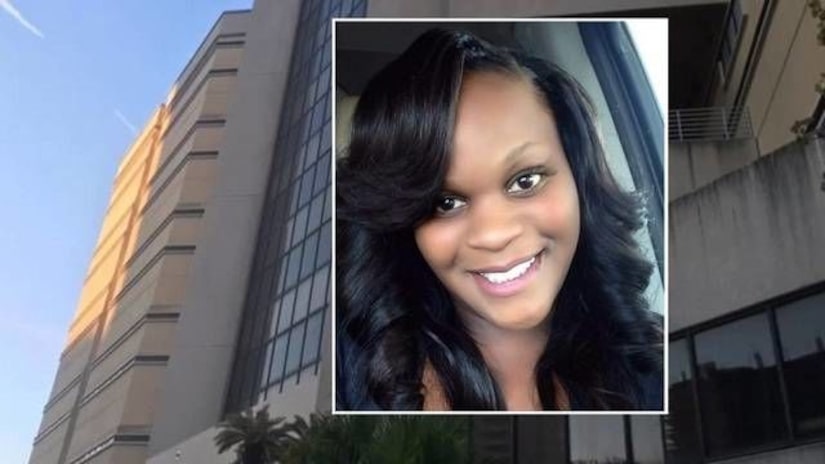 JACKSONVILLE, Fla. -- (WJXT) -- National civil rights attorney Benjamin Crump said Monday morning that the beating of a shackled pregnant woman in the Duval County jail should be investigated as a hate crime because racial slurs were hurled at the woman by the since-fired corrections officer.

Crump's law firm is representing Kirenda Welch, who was arrested June 29 on a suspended license charge after she made an illegal turn.

Welch said she never imagined when she was taken downtown that she would "be the victim of police brutality."

She said things escalated after she arrived at the jail, where investigators said she exchanged insults with Officer Catherine Thompson, who then beat Welch after she was placed in four-point restraints.

She said other officers watched as she was hit and pepper-sprayed while defenseless on the ground.

“I'm not only here today for myself and for my family, but I'm here just to prevent this from happening to anybody else, because it could be you or your family member,” Welch said at a news conference Monday with Crump, who has represented families in several high-profile cases, including the Stephon Clark police shooting in Sacramento and the shooting of Trayvon Martin in Florida.

Crump called the “savage beating” an example of “illegal abuse of excessive force.” He called on the State Attorney's Office and U.S. Department of Justice to investigate the incident as a hate crime.

“Before and during this outrageous attack on this citizen, there were racial slurs being used and hurled at her indicating what was the mentality of this officer as she assaulted and battered this 36-year-old, college-educated black woman,” Crump said. “They were of a nature that could not be misconstrued as anything but racist, (and) those matters need to be charged appropriately.”

Thompson was arrested Thursday afternoon and charged with misdemeanor battery and official misconduct, which is a felony. She was still in her probationary period with the Sheriff's Office and was fired immediately.

Crump said Thompson's termination from JSO and the criminal charges are a “first step” and that he would be filing open records lawsuit for all records, documents and surveillance video to be released in the incident.

“Sunshine is a good disinfectant. A picture is worth 1,000 words and certainly video is worth a million. If we see with our own eyes what took place, then we will know what Ms. Welch encountered may not have been something that was out of the blue if you can see people on that video just watching it happen almost as if it's business as usual,” Crump said.