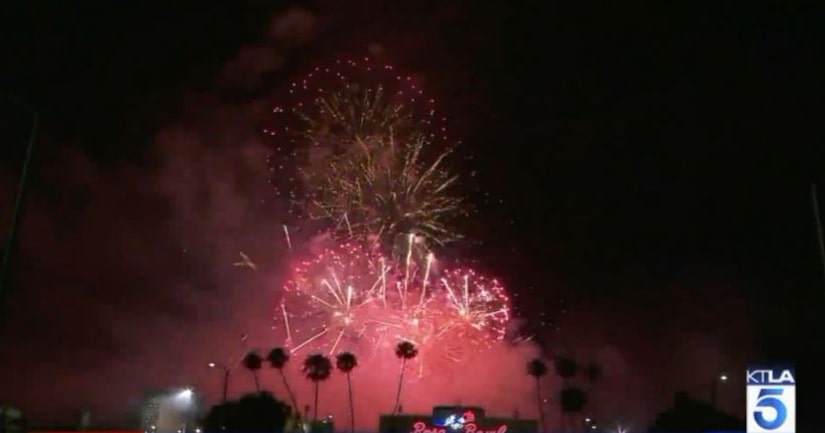 LOS ANGELES -- (KTLA) -- Law enforcement and fire officials from the city and county of Los Angeles held a news conference Monday to urge residents to leave the Fourth of July fireworks displays to the professionals for everybody's safety.

“Unless you have a valid permit, it's against the law in the city of Los Angeles and the county of Los Angeles to store, manufacture, sell, use or handle any kind of fireworks,” Mayor Eric Garcetti said.

Authorities will be patrolling the city and unincorporated areas of the county, and handing out citations to anyone setting off fireworks.

Citations in the city start at $500 and can go up to $50,000, and offenders could also face six months to a year in prison, according to LAPD Chief Michel Moore.

“It's not the time to show young people how to disrespect the law, how to endanger themselves by a parent who wants to celebrate, if you will, by their own private fireworks show,” Moore said.

In the county, the first offense can cost $2,500, and the second offense can jump to $5,000, according to the Sheriff's Department.

During the news conference, several photos of injuries caused by fireworks were on display to highlight the serious consequences that can result during celebrations with fireworks.

“Too often we see situations where young kids are hurt seriously, people lose their homes, tragedies happen that don't need to happen at all,” said L.A. County Sheriff Jim McDonnell.

Data from 2017 shows that between June 17 and July 17, a total of 55 fires were caused by fireworks in the county. Of those, 23 were from illegal fireworks and the rest were caused by “safe and sane” fireworks, said L.A. County Fire Chief Daryl Osby.

In one documented case, a 15-year-old boy wrapped a group of sparklers and lit them on fire, which then exploded. He lost one eye, several fingers and a leg, according to Dr. Matt Young of the Grossman Burn Center.

These are tragedies that doctors don't want to see and that are all preventable, Young added.

With dry conditions across the Southland and record-breaking heat expected by the end of the week, the possibility of fireworks sparking brush fires is also a concern.

“With us facing another hot summer, we are extremely, extremely concerned about having large brush fires like we did last year, like the La Tuna, the Creek and the Skirball fires,” said L.A. Fire Chief Ralph Terrazas.

FULL STORY: 'Leave it to the experts': L.A. area officials urge public not to set off fireworks for Fourth of July - KTLA