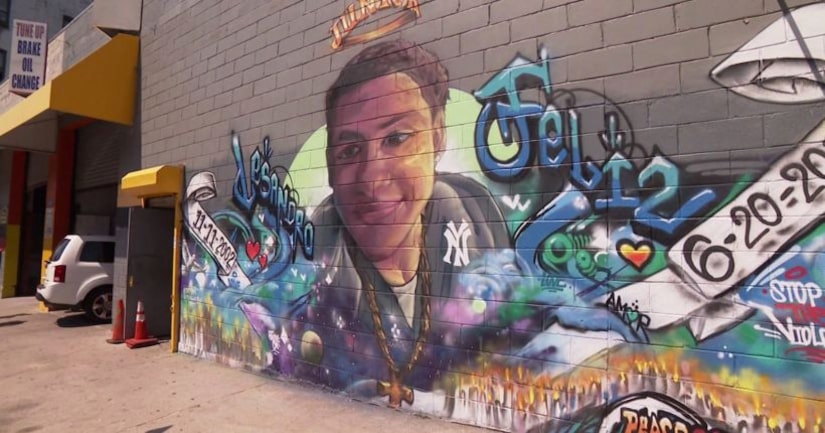 THE BRONX -- (WPIX) -- Another mural has been painted in the Bronx in honor of a 15-year-old who was stabbed to death by alleged gang members.

The mural, at East 184rd Street and Bathgate Avenue, shows Lesandro “Junior” Guzman-Feliz surrounded by candles, a dove, his name, and the date of his birth and death.

Above the teen's portrait is his nickname, Junior, written out in a halo. Two other phrases mark the mural: "peace," and "stop the violence."

The muralist told PIX11 he did not wish to speak about the piece, in order to keep the focus Guzman-Feliz.

It is the second known mural painted in honor of the teen, who was killed June 20.

Guzman-Feliz was inside a bodega at East 183rd Street and Bathgate Avenue, one block from the mural, that night when he was dragged out and assaulted by a group of men with knives and a machete. The boy's neck was slashed in the attack.

Video shows the 15-year-old staggering back into the bodega, where some say he was turned away — a claim the owner has refuted, saying those inside were pointing toward a local hospital.

The boy then fled toward St. Barnabas Hospital, ultimately collapsing and dying outside.