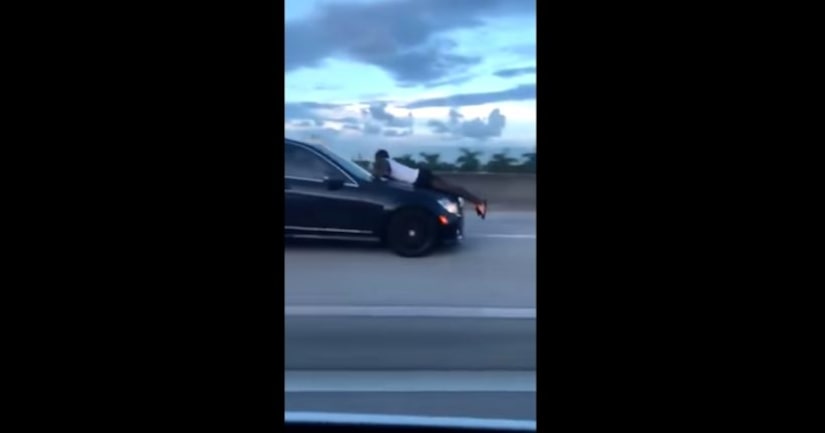 FLORIDA -- (KTLA) -- A Florida woman was charged this week after she allegedly drove on a highway with her ex-boyfriend clinging to the hood of a car in Broward County, in an incident that was captured in a viral video, according to reports.

Patresha Isidore, 24, and Junior Francis, 22, had an argument at a home in Lauderhill, because both needed to use the car Sunday night, but Isidore — who needed to pick up their 5-year-old daughter — got to the vehicle first.

“I had to go get my child. I wasn't going to deal with any foolishness,” she told Miami television station WSVN on Tuesday.

But when Isidore attempted to leave in the car, Francis jumped on the hood and held on. Still, that didn't deter the woman from getting on Interstate 95.

“He had plenty of times to get off the car. He didn't want to stop,” she said.

Once on the highway, she pulled into the express lane and drove at a speed “consistent with traffic,” as other motorists watched in astonishment, according to court documents obtained by the Smoking Gun.

Isidore said she continued driving because she felt threatened.

“He was threatening me, so I was scared, so of course I wasn't going to stop and let him get in the car,” she told the station, explaining they had broken up eight months ago but that he was “crazy” and wouldn't “leave me alone.”

Isidore recorded everything from inside the car, but some motorists on the highway also filmed the event and posted it online. One video was viewed more than a million times.

The footage shows Francis clinging to the speeding Mercedes-Benz as it reached speeds of up to 70 mph. He told Miami television station WPLG he was on the phone with police at one point, grasping onto the car with one hand while using the other to hold onto the mobile device.

FULL STORY: Florida woman who was filmed driving on highway with ex-boyfriend clinging to car's hood speaks out - KTLA