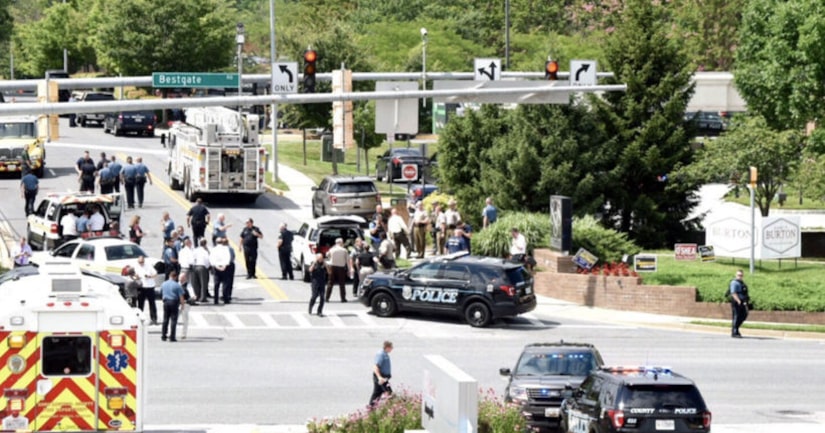 Five people were killed in a shooting at the offices of the Capital Gazette Thursday in Annapolis, Maryland and at least two others were hospitalized with injuries.

The shooting occurred at approximately 2:40 p.m. Eastern Time, according to local police. Authorities said police responded to the incident within 60 seconds of the shooting being reported.

"If they were not there as quickly as they were, it could have been a lot worse," Annapolis Mayor Gavin Buckley said.

In an 8 p.m. ET news conference, police said a white man in his 30s entered the building with a shotgun and fired on people on the lower level. Five people are confirmed dead, and two people sustained superficial injuries.

The victims were identified as Rob Hiaasen, 59, a former feature writer for The Baltimore Sun who joined the Capital Gazette in 2010 as an assistant editor and columnist; Wendi Winters, 65, a community correspondent who headed special publications; Gerald Fischman, 61, the editorial page editor; John McNamara, 56, a staff writer who had covered high school, college and professional sports for decades; and Rebecca Smith, 34, a sales assistant hired in November, the Capital Gazette reports.

The suspect used smoke grenade canisters when he entered the building.

The suspect lives in Maryland, and authorities were preparing to search the man's residence, police said.

Police said threats were sent to the Capital Gazette through social media possibly as recently as today. The threats "indicated violence."

Police said they have no knowledge any specific person was targeted.

Police said earlier reports about the suspect mutilating his fingers in an attempt to alter his fingerprints are not confirmed.

The suspect is Jarrod W. Ramos, a 38-year-old Laurel man whith a longstanding dispute with the Capital, according to law enforcement sources familiar with the investigation, the Capital Gazette reports.

His dispute with the Capital began in July 2011 when a columnist at the paper covered a criminal harassment case against him. In 2012, Ramos brought a defamation suit against the columnist and the paper's former editor and publisher. In 2015, Maryland's second-highest court upheld a ruling in favor of the Capital Gazette and a former reporter who were accused by Ramos of defamation.

Anne Arundel County Executive Steve Schuh told CNN the suspect was found hiding under a desk, possibly trying to hide from police, and that the gun was not in the immediate vicinity of the suspect.

Schuh said four victims died in the building at the scene and one victim died at the hospital during treatment.

The building is secure, according to officials. A bomb squad did recover what they thought was an explosive device, an official said. That item was "taken care of."

Lt. Frashure said the detained shooter is the only suspect in the incident. The type of weapon used in the shooting was not immediately known, police said.

The Associated Press reports an official says the suspect is a white male who is believed to have used a shotgun and was not cooperating with investigators.

Lt. Frashure said the suspect is a white adult male who was carrying a "long gun," but did not have further details. He said no gunfire was exchanged between the suspect and police.

The number of injuries was estimated at three people, Frashure said.

Authorities said in a second news conference Thursday that 170 individuals were escorted safely from the building.

Another update was expected at 8 p.m. Eastern Time.

A shooting has been reported at the Capital Gazette offices in Annapolis.

Maryland State Police confirm there are multiple injuries, but did not elaborate pending further investigation.

Anne Arundel County Police confirmed there was an “active shooter” at 888 Bestgate Road, where the newspaper's offices are located, the Capital Gazette reports.

A police spokesman said officers were looking for other dangers, such as bombs and other shooters, the Associated Press reports.

Phil Davis, a Gazette reporter, said that multiple people had been shot.

Gunman shot through the glass door to the office and opened fire on multiple employees. Can't say much more and don't want to declare anyone dead, but it's bad.

The Bureau of Alcohol, Tobacco, Firearms and Explosives confirmed it was responding to a “shooting incident” at the Gazette.

Police said the building was being evacuated as officers continue searching it, according to the Gazette.

An intern with the Capital Gazette wrote on Twitter: "Please help us."