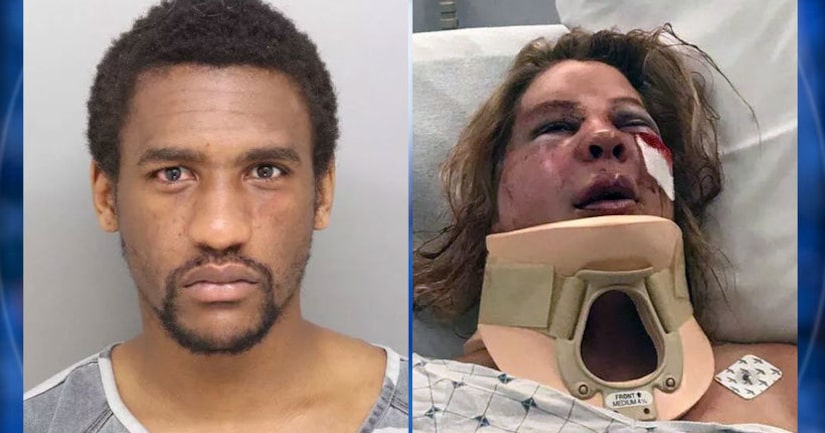 CINCINNATI -- (WXIX) -- A Cincinnati man is in jail facing charges after police say he attacked a pregnant woman and tried to rape her, but the woman fought back.

The woman who survived the attack said she is suffering a fractured nose along with bruising and swelling to her face.

The incident reportedly happened on Friday, June 22 around 11 a.m. The woman, who shared photos of her injuries, but asked FOX19 NOW not to use her name, said she was walking her dog on Riverside in the East End when it occurred.

The nine-months-pregnant woman noticed a man, who police now identify as 27-year-old Anthony Smith, coming down Collins. She said something about his behavior made her uneasy, so she crossed the street attempting to put distance between them, but Smith followed her.

The woman reported that she then headed towards the LeBlond Center pool where people were swimming. Smith, she said, continued to follow her.

At one point, the woman said she turned and yelled at Smith, saying things like "stay away from us," but Smith still did not stop. The woman, in a panic, took off running, until she said she felt Smith tackle her to the ground and try to pull up her shirt and pull down her pants, all while mumbling "it's okay, let me do this."

A group of people at the pool heard the commotion and rushed over to help. Three men, the woman said, held Smith down, while others tended to her and called 911. In the meantime, the woman's dog reportedly ran home, potentially seeking help.

After two days in the hospital, the woman's family said she is now out, recovering from her injuries. She said she is forever grateful for the witnesses who stepped in and saved her and her baby's life and has since thanked those individuals in person.

The woman and her family did not want to speak on camera, but the woman's sister told FOX19 NOW that the baby is perfectly healthy, and the dog is doing okay too.

The woman who was attacked credits her quick thinking to a true crime podcast that she often listens to called "My Favorite Murder."

Smith is in the Hamilton County Jail on charges of felonious assault and attempted rape. His next court date is in July.