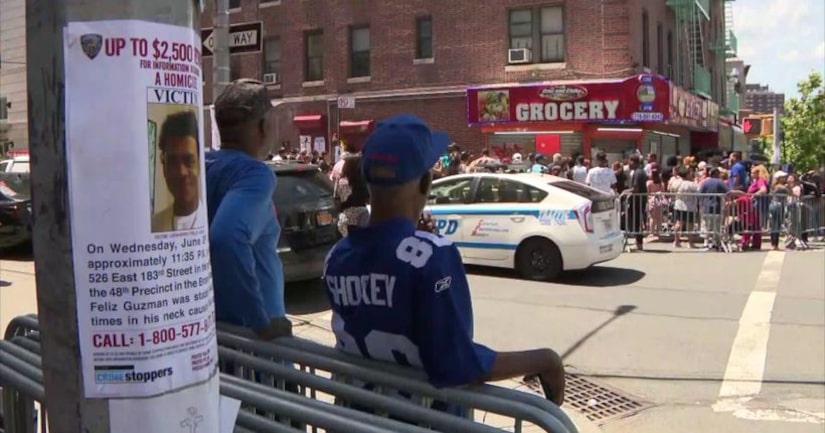 BELMONT, The Bronx -- (WPIX) -- Several City Council members and more than 100,000 people who signed a petition have demanded the closure of the bodega where a 15-year-old Bronx boy was stabbed to death with machetes and knives.

Bodega workers on Friday had told PIX11 they did everything they could to help the teen, but members of the community say surveillance videos show that isn't the case. They're clamoring for the store's closure.

The videos show men dragging Lesandro “Junior” Guzman-Feliz, 15, out of the Bronx bodega by his hood. Another video shows Guzman-Feliz staggering back into the bodega after the attack and slumping over the counter. A person inside repeatedly points to the door of the East 183rd Street and Bathgate Avenue bodega and Guzman-Feliz walks out toward St. Barnabus Hospital, just one block away. He died just outside the hospital.

Council members Ritchie Torres, Vanessa Gibson and Rafael Salamanca, who all represent parts of the Bronx, demanded the bodega's closure in a Monday letter to the Department of Consumer Affairs.

"It has long been held that one of the legal requirements for operating a business in the City of New York is good moral character," they wrote. "We are writing to express outrage over the failure of moral character that characterizes the conduct of Zesarina Grocery on the night of June 20th, 2018. An owner who stands by idly while a 15-year-old is dragged out of his store and murdered in cold blood with a machete is no longer worthy of doing business in NYC."

"While it might be unfair to expect a business owner, untrained in law enforcement, to perform heroics in the midst of savage gang violence, the failure to do something as basic as calling 911 is morally unconscionable," the council members wrote. "As the local Council Members, we feel deeply the public's outrage and urge DCA to hold Zesarina accountable for failing to demonstrate -- in a moment when the life of an innocent child was at stake -- the good moral character required by law."