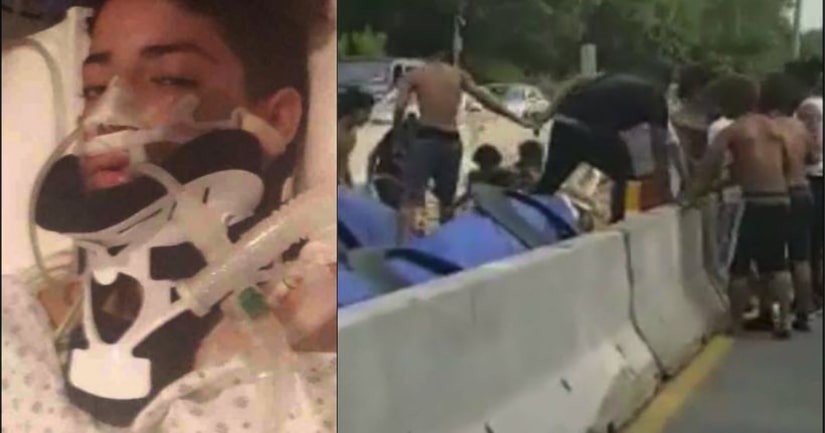 OLINVILLE, The Bronx -- (WPIX) -- The same gang responsible for the brutal machete slaying of a 15-year-old boy in the Bronx last Wednesday is now being blamed for attacking another teen, also in the Bronx, on June 18, police tell PIX11 News.

Cellphone video shows a large group of men attacking the 14-year-old victim on the median of the Bronx River Parkway near the East Gun Hill Road exit.

Police say members of the Trinitarios gang chased the teen on the busy Bronx River Parkway during rush hour last Monday. The teen was left on the median after being stabbed repeatedly. The teen was rushed to the hospital where he remains in critical condition.

Ramon Paulino, 21, is in police custody, while cops hunt for several other men caught on video kicking, punching and stabbing the teen. He's charged with attempted murder, gang assault and assault.

Last week, another teen, 15-year-old Lesandro "Junior" Guzman-Feliz, was dragged outside a Bronx bodega by a gang of men who stabbed him as he struggled to defend himself. He died after running to a hospital three blocks away.

The teen's slaying was captured on surveillance video and sparked widespread community outrage.