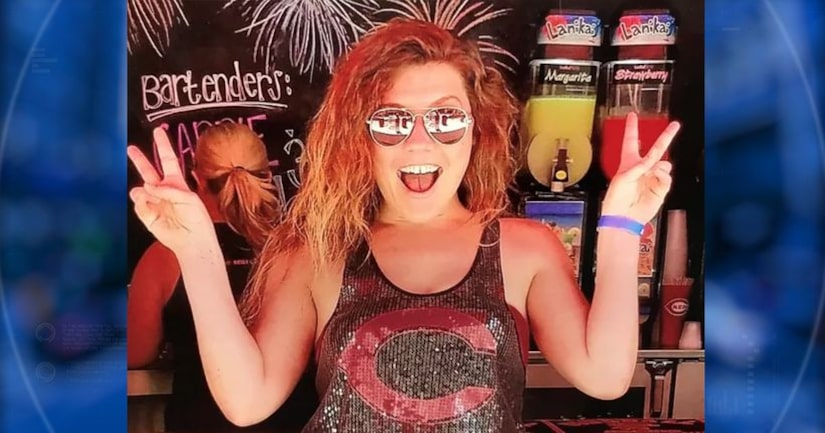 LAWRENCEBURG, Ind. -- (WXIX) -- Indiana police say two men helped a woman commit suicide. One man has been arrested and charged, while another is still evading police in Lawrenceburg, Ind.

Clarissa "Carrie" Schultz, who would have turned 32 on Father's Day, took her own life in May.

The victim's mother and sister spoke with FOX19 this week. The family shared a video of the victim from the last day anyone saw her. She was alive and happy at a Reds game -- they say she went to a couple of bars after.

"Carrie was in a really good mood, she was up dancing, being Carrie," said her mom Vivan Cornett.

Cornett said Carrie took a ride on a motorcycle with a friend, William Ford "Billy" Skipton, before ending up at The Levee Breaker Bar in Lawrenceburg that night.

"Her blood level was a .307. The legal limit is .08, so she was almost three times the legal limit," said Dearborn County Prosecutor Lynn Deddens.

Deddens said Carrie was upset over a death anniversary of an old boyfriend who had committed suicide.

"Yes, she took it hard," said her mother.

She said Skipton, who's accused of helping her daughter kill herself, showed up at the door while Carrie was at the Reds game, knowing Carrie had been struggling emotionally.

"He said, 'Tell her I have something that'll help her make it through it,'" said Cornett.

Deddens said Carrie and Skipton had talked about her ex's death a lot.

Police said Skipton told them Carrie took his gun from his apartment. But witnesses at the bar the night of the Reds game have different accounts.

"Skip kept saying something about giving her the gun," said Cornett. "And they said, 'Why would you give her a gun? She's upset. Don't do that.'"

Witnesses said Carrie got up and walked out the back door. She said she was going to fire a round off, according to Deddens, and then the witnesses heard a pop.

Police said he told them he hid it in the bar's kitchen.

"Hid it up in the ceiling tiles," said Cornett through tears.

Cornett told FOX19 she can't believe her daughter would put her two kids through this.

"And I don't think she would put me through this, we were very close," she said. "She loved life too much."

Bartender Steven Melrose is in jail. Authorities say he called 911.

"He knew Ms. Schultz was 'buzzed,' as he had put it, and he served her alcohol," said Deddens, who said he's also charged with false informing, for covering-up for Skipton about the whereabouts of the gun.

FULL STORY: 'Why would you give her a gun?': Man sought in Indiana assisted suicide case - WXIX