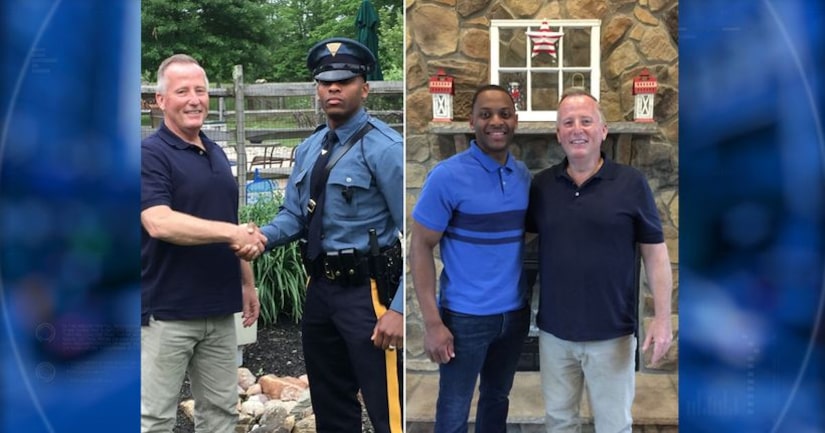 PISCATAWAY, N.J. -- (WPIX) -- A New Jersey State Trooper got an unexpected surprise Friday when he pulled over a driver for a minor traffic violation — and discovered that the man behind the wheel was the officer who delivered him 27 years ago.

“We're not sure what the odds are of this happening — maybe they're close to the odds of a hole-in-one, winning the lottery, or being struck by lightning — but it happened,” New Jersey State Police said in a Facebook post.

Trooper Michael Patterson stopped driver Matthew Bailly in Kingwood Township, on Friday, June 1, and during their conversation, Bailly told Patterson that he was a retired Piscataway police officer. Patterson, a Piscataway native, told Bailly that he was from the same town, and Bailly asked Patterson where he used to live.

When Patterson told him that he grew up on Poe Place, Bailly said that he remembered that street, because when he was a rookie cop, he helped deliver a baby there — 27 years ago.

The date was Oct. 5, 1991. The mother had been out shopping when she went into labor. She barely made it home. The father rushed outside, picked up his wife, and carried her inside the house. He then called the doctor who talked Officer Bailly through the birth.

Bailly was even able to describe the color, style of house, and the baby's name, Michael.

Patterson extended his hand and replied, “My name is Michael Patterson, sir. Thank you for delivering me.”