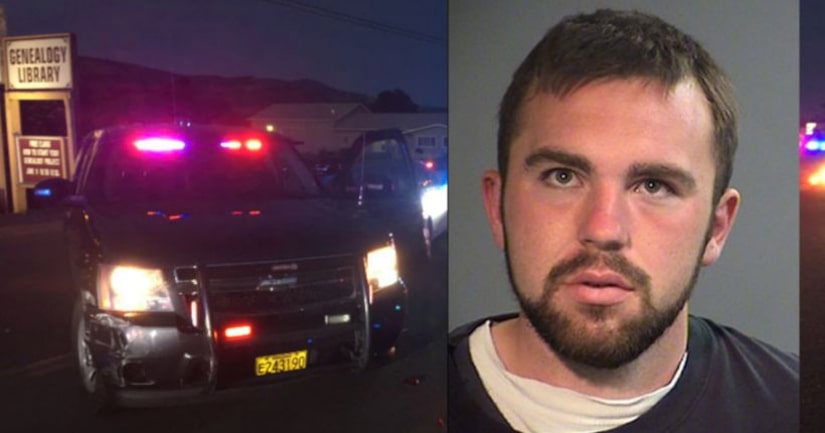 GRANTS PASS, Ore. -- (WBFF) -- A man high on LSD stole a car from the scene of a DUII arrest and took off, driving the wrong way on Interstate 5 and other roads before deputies finally managed to stop the car Saturday night, authorities in southwest Oregon say.

Then the suspect ran off - and tried to steal another car, authorities say.

Deputies caught up to him and took him into custody.

That's when he admitted to taking LSD - and "told deputies he believed he was in the video game 'Grand Theft Auto' and the police were trying to catch him," the Jackson County Sheriff's Office said.

The sheriff's office said the chase started around 8:25 p.m. at the scene of a DUII arrest at Highway 66 and Emigrant Lake Road.

Deputies were waiting for tow trucks to arrive after making multiple arrests.

That's when authorities say Anthony Joseph Clark, 23, got into one of the impounded vehicles - a tan 2003 Toyota Camry - and drove off.

"An OSP trooper attempted to physically stop Clark, but Clark was able to flee in the vehicle," the sheriff's office said. "Clark drove off the roadway, evading law enforcement vehicles nearby, then drove toward Ashland on Highway 66. He turned onto Interstate 5 at exit 14, driving north on the shoulder of the southbound lanes."

The sheriff's office chronicled the chase:

Clark turned around on the freeway near mile marker 16 and drove south, back toward exit 14. An Ashland Police Department officer caught up to Clark. Clark exited and drove west on Ashland Street toward Southern Oregon University. The vehicle turned north on Walker Avenue and crashed through multiple industrial gates off the roadway. The pursuit was terminated as the vehicle entered the more populated area.After driving through the downtown area, Clark was seen driving south on Siskiyou Boulevard in the northbound lanes. He turned around again and headed north through downtown. A JCSO deputy caught up to the vehicle as it left the Ashland city limits.

"Clark attempted to ram a patrol car," the sheriff's office said, "and then ran from the vehicle."

State troopers captured Clark as he tried to steal a car in a nearby mobile home park, the sheriff's office said.

Clark later told deputies he had taken LSD - and believed he was in the video game, the sheriff's office said.