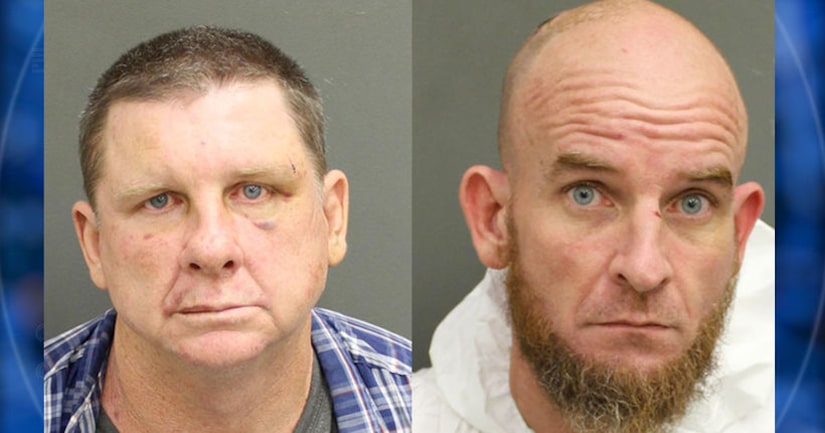 ORLANDO, Fla. -- (WKMG) -- A homeowner and another man used acid bombs to scare unwanted guests from a property in Baldwin Park, according to an arrest affidavit.

Bruce Steffenhagen, 56, and Nathan Martin, 37, were arrested after two explosions were heard in the 4400 block of Beach Boulevard Tuesday morning causing an hours long standoff with law enforcement.

When Orange County deputies arrived, they said Steffenhagen initially told them he didn't know anything about the explosions. He later identified Martin as the man who set off the acid bombs and told deputies Martin was hiding out in his home.

Authorities surrounded the house for several hours before Steffenhagen surrendered, shortly before 4 p.m. Five people were taken out of the home.

During an interview, Martin told investigators Steffenhagen was attempting to kick two occupants out of an apartment off the back of the garage.

According to the affidavit, Martin admitted he and Steffenhagen came up with the idea to make an acid bomb to cause enough noise and fear in the occupants so they would exit.

The report states Nathan told detectives he collected the acid bomb materials, mixed them up and threw the container into a neighbor's yard, where it then exploded.

Steffenhagen later admitted he knew about the bomb and that it would explode, but said he did not know it would be a big deal, according to the affidavit.

Martin is facing a third-degree felony charge of throwing a destructive device with intent of bodily harm. His bond was set at $15,000 during his first appearance Wednesday.

Steffenhagen is facing a third-degree felony charge of principal to possessing or discharging a destructive device. He is being held on $15,000 bond.