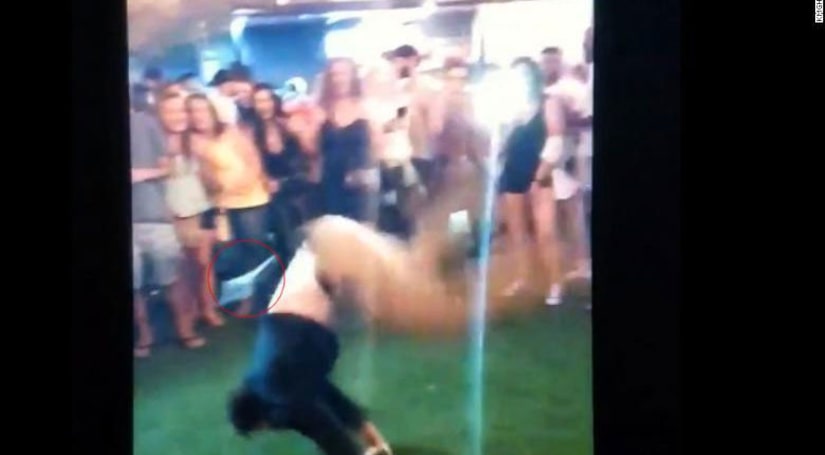 DENVER -- (KDVR) -- An FBI agent allegedly dropped his gun at a bar and another patron was shot in the leg early Saturday. Investigators said it appeared to be an accidental shooting.

Denver police said they were called to a report of a shooting at 2201 Lawrence Street at 12:45 a.m.

A woman who said she witnessed and recorded the shooting with her cellphone said it happened at Mile High Spirits Distillery and Tasting Bar.

In the video, a man can be seen doing a back flip, during which a gun falls out of the back of his waistband. The gun appears to fire when the man picks up the weapon.

"It appears an off-duty Federal Bureau of Investigations (FBI) agent was dancing at a night club when his firearm became dislodged from its waistband holster and fell onto the floor. When the agent retrieved his handgun an unintended discharge occurred, another patron was struck by a bullet in the lower leg," a statement from Denver police said.

The woman who recorded the video, who wanted to only be identified as "Julie," said she smelled gun powder and saw a person bleeding.

"Everyone was kind of shocked after it happened because [the agent] kind of put his gun back away and then he walked away," Julie said.

Julie said she asked the DJ to turn off the music. While it initially stopped, it later continued.

"No one really knew what was going on," Julie said. "I was shocked. I honestly just wanted to make sure that my friends ... [that] I knew where they were."

The shooting victim went to the hospital with a "good prognosis."

The FBI agent was taken to Denver Police Headquarters and later released to an FBI supervisor.

The DPD Homicide Unit is investigating what happened and charges will be determined by the Denver District Attorney's Office.