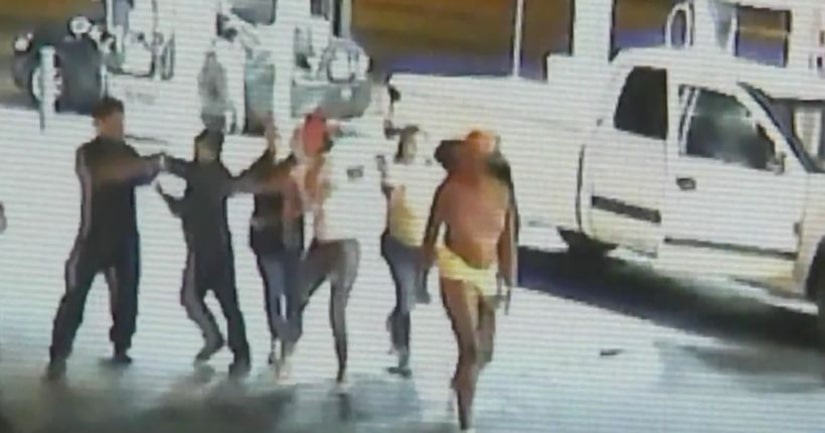 LANCASTER, Calif. -- (KTLA) -- Authorities are searching for two outstanding suspects following a brawl that was caught on video at a 7-Eleven in Lancaster on Monday.

Deputies responded to the gas station at the corner of Challenger Way and East Avenue J around 1:30 a.m., said Lt. Harold Morrow with the Los Angeles County Sheriff's Department.

Preliminary investigation indicates the altercation involving a family and group of four women started as an argument over a gas pump, though it's not clear exactly how or why, Morrow said.

Jason Sandoval, who witnessed the incident and spoke with the victims, said the family earns a living selling fruit out of their truck. They had just finished working for the day when they drove into the gas station.

According to Sandoval, a car carrying four black women pulled up at the 7-Eleven with an apparent intent to wreak havoc.

"The car cut me off then approached the park, then automatically approached the car that was already parked there, which was the white truck with the victims," he told KTLA. "It was just an automatic aggression from there."

Video of the attack was captured both on Sandoval's cellphone and the gas station's surveillance cameras, though 7-Eleven has not released its footage.

The incident began unfolding when the women approached the family's pickup and began attacking it, Sandoval said.

"They were trying to force them out the car and were banging on the doors and windows," he said.

The footage shows a woman wearing yellow shorts opening the passenger side door of the family's truck, then grabbing what appears to be a handbag. Sandoval said she took out a wallet containing $700 — the family's earnings — then threw the purse at the victims.

Morrow confirmed that a wallet was taken stolen from the family.

After the theft, you can see the woman throw the first punch at a man. She then strikes a woman in the face, and eventually even the children were targeted.

"It was saddening and also kind of ignorant for them to do that since I think that they felt they were an easy target," Sandoval said. "Not only that, the kids were also there, so I really hope that the police can catch these people."