TEXAS -- (KFOR) -- Speaking outside a church not far from Santa Fe High School on Sunday, Texas Gov. Greg Abbott said his hope was that the 17-year-old accused of killing 10 people there gets “swift Texas justice.”

But no matter the legal case ahead, that Texas justice will not include the death penalty. In fact, the harshest punishment the suspect can receive is life with the possibility of parole.

That's due to his age and two Supreme Court cases.

“The way it works is there's only one possibility, if he is found guilty,” Robert Barfield, attorney for the suspect, told CNN on Sunday. “It's life in prison with the possibility of parole because of his age.”

Suspect Dimitrios Pagourtzis, 17, is being held on charges of capital murder and aggravated assault on a public servant. The Santa Fe student allegedly used a shotgun and a revolver to kill eight students and two teachers and injure 13 others. Pagourtzis confessed that he acted alone in the shooting, according to a probable cause affidavit.

Why juveniles cannot get the death penalty

Rulings by the US Supreme Court fit a pattern in the past few decades of the justices limiting punishments for those who committed crimes when they were younger than 18.

In addition, the Supreme Court ruled in the 2012 case Miller v. Alabama that states cannot give juvenile offenders life without parole as a mandatory sentence. That, too, was a 5-4 decision.

Under Texas law, the maximum sentence for capital murder for those under 18 is a life sentence that allows for the prisoner to apply for parole after 40 years, according to Robert Dunham of the Death Penalty Information Center.

He clarified that, under this law, the inmate has the right to apply for parole after 40 years but is still unlikely to actually be granted an early release.

Prior to the Roper ruling, Texas led the nation in executing people who committed capital crimes as juveniles, according to the Death Penalty Information Center. Across the United States, 22 people who were juvenile offenders were executed between the reinstatement of the death penalty in 1976 and the Roper ruling in 2005. Thirteen of those executed were in Texas, with the most recent execution in 2002.

Given Pagourtzis' alleged confession and the limits of any future sentence, Barfield said it was too early to discuss the legal strategy for his client going forward. 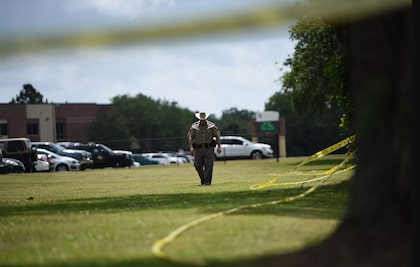